Addressing the United Nations Climate Action Summit in New York, he declared that the second P4G summit will take place in South Korea in June. P4G stands for Partnering for Green Growth and the Global Goals 2030, a public-private initiative to tackle climate change and other sustainable development challenges.

The summit to be held in South Korea will "provide an opportunity to strengthen the international community's solidarity behind implementation of the Paris Agreement and the Sustainable Development Goals," he stressed. 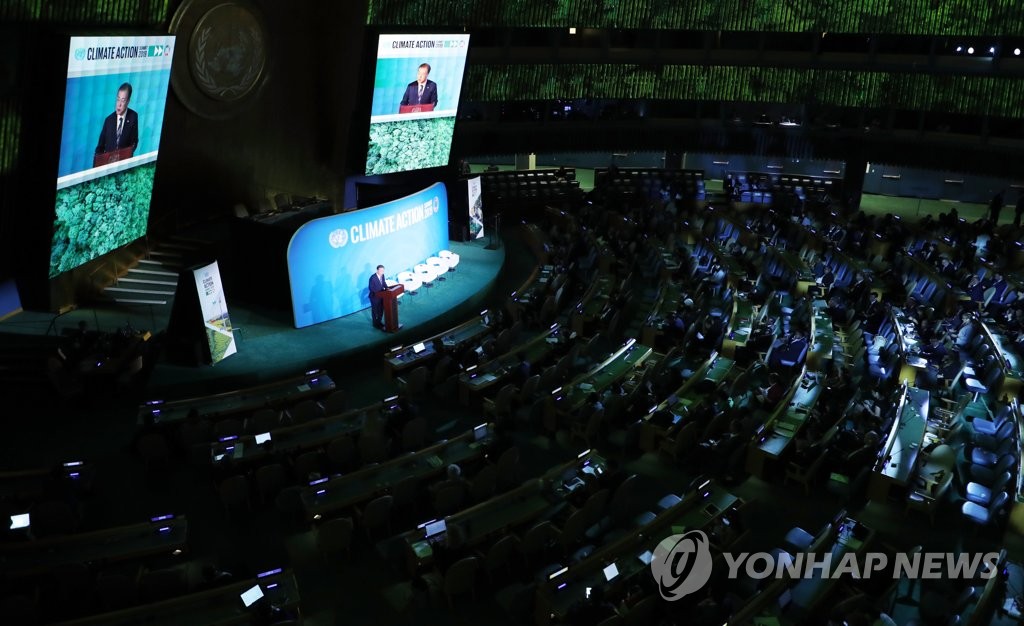 Moon attended the inaugural P4G summit, hosted by Denmark last year, in a show of Seoul's strong support for the initiative.

He said there would be synergy between the P4G and a couple of global organizations based in South Korea -- the Green Climate Fund and the Global Green Growth Institute.

Speaking in front of U.N. Secretary-General Antonio Guterres and leaders of other countries, Moon also proposed the designation of the "International Day for Blue Sky."

More than 7 million people suffer premature death every year due to air pollution, according to the World Health Organization, he pointed out.

He reaffirmed that South Korea will step up its own efforts to cut carbon emissions.

"First, we will explore a variety of measures for transition to a sustainable, low-carbon economy at the earliest date possible, including the formulation of Korean sustainable development goals (K-SDGs)," he said.

South Korea has adopted a nationwide emission-trading system for the first time in East Asia, shutting down four coal-fired power plants with six more plants slated to be closed by 2022.

In January, Moon said, his administration made public a hydrogen economy roadmap and it's also promoting the expansion of renewable and hydrogen energy use.

Seoul also plans to double its contributions to the Green Climate Fund, according to Moon.

Those commitments, he added, will be included in the greenhouse gas emissions reduction goal and 2050 long-term low carbon development strategy that will be submitted next year. 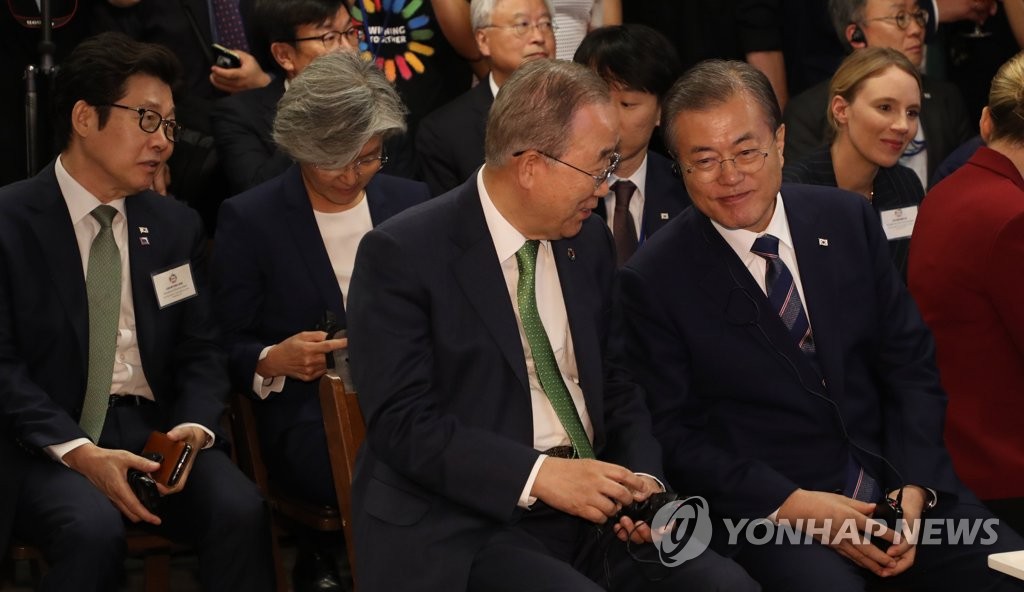 Moon then participated in a separate event to prepare for the P4G summit, which was held on the sidelines of the annual U.N. General Assembly session.

He said South Korea will support sustainable growth in developing countries by linking P4G with the Green Climate Fund and the Global Green Growth Institute on the basis of its experience transforming itself from a developing country into a "responsible middle power."

With regard to next year's P4G summit, he unveiled a plan to adopt a "Seoul Declaration" by fleshing out differentiated goals and strategies in five sectors -- water, food and agriculture, energy, cities and circular economy.

As the Copenhagen Commitment to Action was adopted in the first P4G Summit, the president added, South Korea will upgrade the initiative and give more details through the Seoul Declaration.

"In addition, we will initiate discussions on responses to fine dust, smart cities and the participation of youth and women," he said. "The issues of heat waves, floods, typhoons and poor air quality caused by global warming and climate change have now become serious enough problems to be called 'climate crises.'"

Moon asked all countries worldwide to join forces to formulate concrete goals and strategies and take "extraordinary actions" to tackle the problems.

As the host country, South Korea will "do everything to create a turning point where all of humanity can take action together and put these goals and strategies into practice," he added.