SEJONG, Sept. 24 (Yonhap) -- Cancer topped the list as the No. 1 cause of death in South Korea, a government report showed Tuesday.

In 2018, a total of 298,820 deaths were reported in South Korea, up 4.7 percent from a year earlier. It marked the highest level since 1983 when Statistics Korea began to compile data on deaths.

The statistics agency said 79,153 people died of cancer, accounting for 26.5 percent of all deaths. Cancer has been the No. 1 cause of the death in South Korea since 1983.

Heart disease is the second-largest cause of death for South Koreans with 10.7 percent, followed by pneumonia with 7.8 percent.

Pneumonia climbed up the list by one notch from a year earlier. 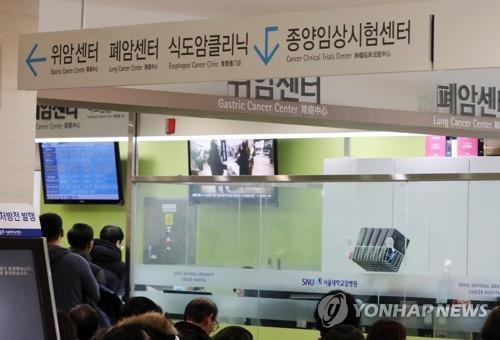 Among 10 leading causes of death, heart disease, pneumonia and Alzheimer's disease are on the rise, while cerebrovascular disease and diabetes are on the decline, according to the statistics agency.

The report showed suicide remained the No. 1 cause of death for people aged between 10 and 39 in South Korea in 2018, a chronic problem that has plagued the Asian country for more than a decade.

Suicide is the second leading cause of death for people in their 40s and 50s.

Increased suicide appeared to be blamed on the so-called Werther effect. The effect, also known as copycat suicide, means an emulation of a suicide attempted by a celebrity.

The suicide rate per 100,000 people stood at 24.7 in 2018, much higher than the 11.5 average among the Organization for Economic Cooperation and Development (OECD), a group of 36 mostly rich and advanced nations.

Suicide had been on the decline since 2011 due in part to the government's anti-suicide campaign.

Cancer still No. 1 cause of death in S. Korea

Cancer still No. 1 cause of death in S. Korea