NEW YORK, Sept. 24 (Yonhap) -- South Korean President Moon Jae-in has had talks with the chief of International Olympic Committee (IOC) here Tuesday, in which they agreed to cooperate on the issue of a joint bid by the two Koreas to host the 2032 Olympic games.

Moon also signaled a push for an inter-Korean delegation to participate in next year's Tokyo Olympics in order to help promote peace and reconciliation on the peninsula.

During the half-hour meeting with IOC President Thomas Bach, Moon pointed out that the Korea peace process started in earnest with North Korea's participation in the PyeongChang Winter Olympics in South Korea last year, according to Cheong Wa Dae. 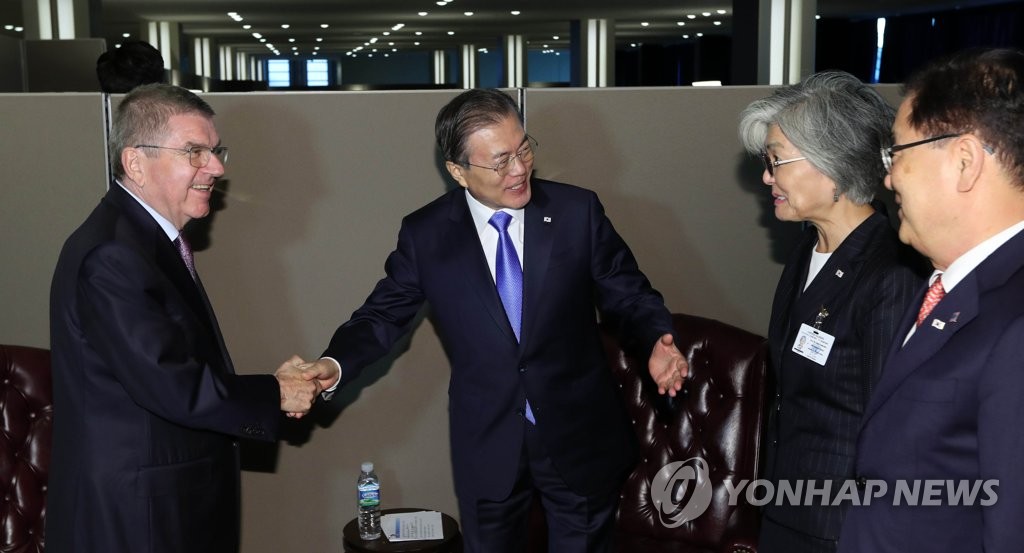 He told Bach that South Korea is considering a joint bid with North Korea to play host to the 2024 Winter Youth Olympics as part of preparations for a full-fledged bid to host the 2032 games.

Moon noted that Tokyo and Beijing will serve as venues for Olympic games next year and in 2022, respectively, expressing hope that it will help promote peace and prosperity in Northeast Asia, Cheong Wa Dae said. Moon and the IOC president are on a visit to New York for the annual U.N. General Assembly session.