It will be Google Cloud's eighth data center in the Asia Pacific region, and it wants local companies to expand globally and multinational customers to do business in the country, they said.

"Google Cloud has focused on four industries -- finance, health care, retail and manufacturing -- globally," Yang Seung-do, an official in charge of Google's cloud business in South Korea, told reporters in Seoul. "Our goal in the country is to efficiently use Google Cloud in various industries instead of focusing on just one."

Among the lineup of major customers is the country's largest mobile gaming firm, Netmarble Games, which uses Google Cloud to support new game development and to manage infrastructure, according to the global tech giant.

Amid rising demand for cloud services from various sectors, Google's archrivals -- Amazon Inc. and Microsoft Inc. -- have also beefed up their technology skills and diversified their business models.

Amy Krishnamohan, Product Marketing Manager at Google, said that what sets Google apart from other players is its world-class security and low latency.

Google has invested in 14 subsea cable systems with a total of approximately 112,000 kilometers of cable, she said.

According to market researcher Gartner, South Korea's cloud industry is valued at US$1.9 billion, with its compound annual growth rate expected to reach 19 percent by 2022. 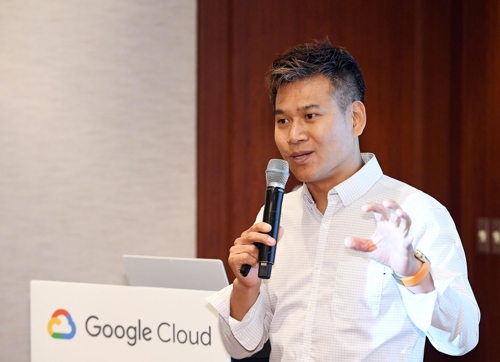