(ATTN: UPDATES with remarks from a BOK official in paras 6-8; ADDS photo)
By Byun Duk-kun

SEOUL, Sept. 26 (Yonhap) -- South Korea's financial stability worsened slightly in August due to a rise in household and corporate debt in the face of an economic slowdown, a central bank report showed Thursday.

The country's financial stability index came to 8.3 at the end of last month, breaching the 8-point mark for the first time since early 2016, according to the Bank of Korea (BOK).

The 8-point mark is the lower boundary for a warning, while an index of over 22 means the country may be in a financial crisis, according to the BOK.

"The financial stability index has been on the rise since March 2019 and slightly topped the lower boundary for the cautious stage (8-22) in August," the BOK said in its report submitted to the monetary policy board.

"This was largely caused by the worsening sentiment of economic players due to the deterioration of external conditions, such as the U.S.-China trade dispute and Japan's export restrictions, along with increased uncertainties in the capital market," it added. 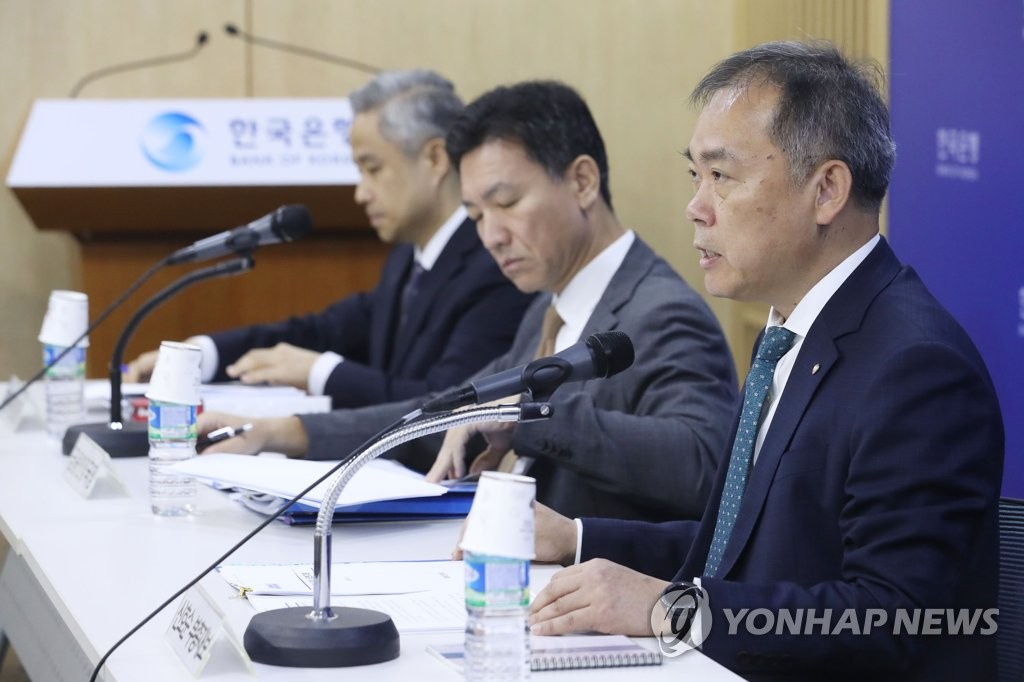 A senior BOK official explained the index did not signal an oncoming crisis.

"We do reserve awareness over the fact that the index has slightly breached the lower boundary for the cautious stage, but I affirm that the stability of our overall financial system and its restorative power remain strong," he added.

South Korea's exports have dipped for nine consecutive months since December amid the escalation of the unprecedented trade war between the world's two largest economies, which are also the largest importers of South Korean products.

The country's own trade spat with Japan is expected to further weigh on the outbound shipments of Asia's fourth-largest economy, which expanded at a disappointing pace of 1.9 percent in the first half of the year, far below the annual growth rate of 2.7 percent in 2018 and the 2.2 annual growth target set by the BOK for this year.

The report came as household debt growth quickened its pace in the first half on hopes of rate reductions.

Overall household debt, including credit card spending, came to 1,556.1 trillion won (US$1.3 trillion) as of the end of June, up 4.3 percent from a year earlier.

The central bank slashed the policy rate by a quarter percentage point to 1.50 percent in July -- its first rate cut in three years. It is widely expected to further reduce the base rate before the year's end, and many believe the policy rate may reach a new record low of 1 percent next year.

The BOK said the local economy, as well as its financial stability, continues to remain strong, but it noted a rise in the loan delinquency rate of households, especially those in rural areas, and marginal firms may present a future challenge.

The loan-to-value (LTV) ratio of home-backed loans extended to households in the capital region has also fallen slightly to 49.4 percent from 49.8 percent, partly because of tougher government regulations implemented in 2017 as part of efforts to curb real estate speculation.

The LTV ratio of home-backed loans extended to rural households, on the other hand, surged to 56.2 percent from 50.1 percent, according to the BOK.

"The financial soundness of loans extended to rural households has steadily deteriorated since 2017 as the borrowers' ability to meet their debt obligations has worsened due to a drop in the value of their collateral caused by a drop in real estate prices, along with a drop in their income," the report said.

Local businesses may also pose a threat to the country's financial stability, with the number of marginal firms, or those with an interest coverage ratio of less than 1, on the rise.

As of the end of 2018, loans extended to such firms amounted to 107.9 trillion won, or 13.8 percent of overall corporate loans, up 0.4 percentage point from a year earlier.