SEOUL, Sept. 26 (Yonhap) -- South Korea's health authorities said Thursday that they will suspend the manufacturing and sales of some ranitidine drug products that contain a probable human carcinogen.

The Ministry of Food and Drug Safety said a total of 269 ranitidine medicines contain N-nitrosodimethylamine (NDMA), a substance known to cause cancer, exceeding acceptable limits.

Ranitidine medicines decrease the amount of acid made in the stomach and are commonly used to treat stomach ulcers and heartburn, which is also called gastroesophageal reflux disease. One of the brand names of ranitidine here is Zantac.

The World Health Organization classifies NDMA as Group 2A, a probable human carcinogen. It is a known environmental contaminant and also found in water and foods.

The drug ministry said the manufacturing, import and distribution of all 269 ranitidine-based drugs will be also banned, with prescriptions banned until further notice.

The U.S. Food and Drug Administration and the European Medicines Agency (EMA) earlier issued a safety alert citing the low-level presence of NDMA in ranitidine.

The Seoul ministry then collected 29 ranitidine products on the market and concluded that seven of them showed NDMA levels as high as 53.5 ppm, above the acceptable level of 0.16 ppm.

The ministry said some 1.44 million patients in the country are estimated to take the medicine, mainly for gastrointestinal diseases, and most of them for less than six weeks a year.

The agency said it will form a committee to assess possible long-term effects on patients who have been taking ranitidine.

The agency also advises patients taking the products to discontinue use and talk to their doctors about safety concerns and other treatment options. 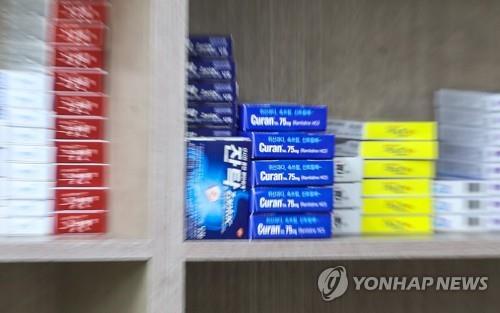