"This partnership is a terrific opportunity for both companies to leverage our respective strengths and create new opportunities to grow and broaden the product portfolio we bring to our customers," Cummins Vice President Thad Ewald said in the statement.

Hyundai Motor Vice President Kim Sae-hoon, who is in charge of the carmaker's fuel cell business, said the partnership will enable Hyundai to further diversify its activities and reinforce its global hydrogen leadership through sales of new and existing fuel cell systems.

Hyundai said it expects collaboration with Cummins, the world's largest maker of diesel engines, to provide a springboard for it to strengthen its presence in the North American commercial vehicle market and explore business opportunities in other markets.

H2USA, a public-private partnership promoting hydrogen vehicles in the United States, forecast the number of hydrogen-powered vehicles will jump to 4.5 million in the U.S. in 2035 from 200,000 in 2025 as governments adopt stricter emissions standards, the statement said.

Hyundai Motor Group, which aims to morph into a future mobility solutions provider, announced in December that it will invest 7.6 trillion won (US$6.7 billion) in hydrogen car-producing facilities and related R&D activities by 2030.

Under the plan, the group will establish two separate plants to churn out 500,000 hydrogen vehicles in 2030. A hydrogen car is considered to be environmentally friendly since it emits only water vapor as it generates electricity.

Hyundai had sold about 2,400 Nexo hydrogen cars in global markets as of the end of July. 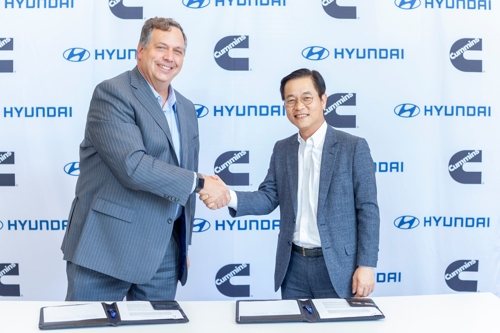