SEOUL, Sept. 27 (Yonhap) -- Prosecutors on Friday raided the National Police Agency (NPA) headquarters in western Seoul, widening their probe into allegations that a ranking NPA officer was involved in attempts to cover up irregularities at southern Seoul nightclubs.

Prosecutors and investigators from the Seoul Central District Prosecutors Office searched the office of a senior superintendent, identified only by his surname, Yoon, at the NPA headquarters, beginning at 9 a.m., before reportedly securing his computer hard drive and other materials relevant to their ongoing probe.

The 49-year-old Yoon made headlines early this year after he was mentioned in group chatrooms of K-pop stars, including former boy band BIGBANG member Seungri, as someone who helped cover up illicit dealings at nightclub Burning Sun and other businesses run by Seungri. 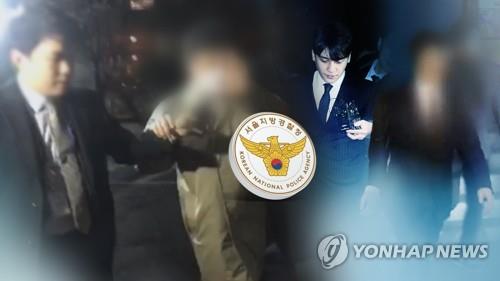 Prosecutors have since widened their probe into an allegation that Seungri and Yoo treated Yoon to illicit meals and golf trips. Yoon and Yoo allegedly played golf four times and dined together six times between 2017 and 2018, while the senior police officer was given free concert tickets three times. But police investigators had not charged Yoon with violating the anti-graft law because the value of the alleged favors did not warrant criminal punishment.

Prosecutors last week arrested a former head of specialty ink maker Nokwon C&I, surnamed Jeong, who reportedly acted as a link between Yoon and Yoo, on charges of embezzlement.