Kang's comment comes after U.S. Secretary of State Mike Pompeo told reporters Thursday that the talks would not take place this month as hoped for.

"I expect it (to happen) in several weeks," the minister told Korean reporters on the sidelines of the United Nations General Assembly in New York. 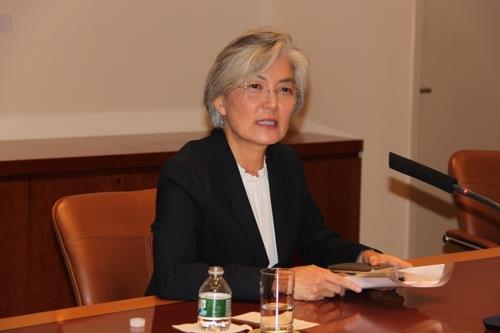 Denuclearization talks between Washington and Pyongyang have stalled since the second summit between U.S. President Donald Trump and North Korean leader Kim Jong-un in February ended without a deal.

Earlier this month, North Korea proposed that the two sides resume talks in late September, but they have yet to materialize.

Trump has spoken repeatedly of the North's economic potential that could be realized if the regime gave up its nuclear weapons and ballistic missile programs.

But Pyongyang has insisted that the sides trade denuclearization measures for sanctions relief and security guarantees in a step-by-step manner.

Earlier Friday, Kim Kye-gwan, a former chief nuclear envoy for Pyongyang, complained that U.S. politicians are "obsessed" with the idea that the North can get access to a "bright future only when it abandons its nukes first" and that sanctions led Pyongyang to the dialogue.

"I came to know that President Trump is different from his predecessors in political sense and decision while watching his approach to the DPRK, so I would like to place my hope on President Trump's wise option and bold decision," Kim said in an English statement carried by the country's official Korean Central News Agency.

Trump said earlier this week that another meeting with Kim "could happen soon," but likely after there has been progress in the working-level talks.

Meanwhile, in talks between South Korean President Moon Jae-in and Trump in New York Monday, the two reaffirmed their close personal relations, strong coordination between Seoul and Washington, as well as the spirit of the first Trump-Kim summit in Singapore in June 2018, Kang said.

Moon also used his speech to the U.N. General Assembly to express South Korea's commitment to addressing challenges in climate change and human rights, she added.

Citing her meetings with her Chinese and Japanese counterparts on the sidelines of the U.N. gathering, Kang said each side "committed to continue working toward actual progress in (North Korea's) denuclearization through the early resumption of North Korea-U.S. working-level negotiations."