The suspected case was reported at a farm in the city of Yangju, 30 kilometers north of Seoul, according to the Ministry of Agriculture, Food and Rural Affairs.

Should the case test positive for the highly contagious disease, South Korea will have experienced 10 confirmed ASF cases since Sept. 17, when the first was reported.

There were several suspected cases in Yangju earlier this week but all tested negative, according to the ministry. 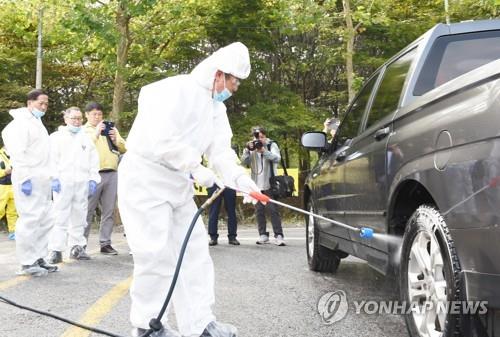 As part of preventive measures, the authorities began slaughtering all pigs at farms located in the county of Ganghwa, Incheon, west of Seoul, on Saturday, according to Incheon Metropolitan City.

Ganghwa is regarded as the most vulnerable region, as five out of the nine confirmed cases have come from there.

Following such cases, the Ganghwa district office first suggested culling all pigs in the region to prevent the further spread of the virus, and the agricultural ministry gave its approval.

A total of 38,000 pigs are subject to the measure, which will bring the total number of pigs culled or to be culled across the country to nearly 90,000, according to the ministry.

The government pledged to compensate the farmers for the losses and to come up with measures to provide psychological support for workers involved in the slaughter work.

Earlier this week, the ministry also extended a movement ban for all pig farms, slaughterhouses and related facilities across the country through Saturday to prevent the spread of ASF.

With the country struggling to identify the origin of the deadly virus, Prime Minister Lee Nak-yon on Saturday instructed officials to look into all possibilities.

All confirmed or suspected cases have come from northern areas of Gyeonggi Province near the inter-Korean border, but no clear infection route has been identified.

"We have taken measures fully in accordance with our manuals and sometimes beyond that. But what we are doing seems far from perfect, as those measures are under the premise that the virus could be transmitted via people, vehicles or big animals," Lee said while presiding over a pan-government meeting in Sejong, an administrative city 120 kilometers south of Seoul.

Pointing to the possibility of the virus spreading through underground water or small insects, Lee said, "There could other routes that we've never imagined. ... Please listen to all experts at home and abroad and take new quarantine measures that have never been taken before."