SEOUL, Sept. 28 (Yonhap) -- A large number of people gathered in Seoul on Saturday to support Justice Minister Cho Kuk and his drive to reform the prosecution despite a widening investigation into corruption allegations involving his family.

A candlelight demonstration was held late in the day in southern Seoul where the Supreme Prosecutors' Office is located. Participants voiced support for Cho, claiming that the media is conspiring with the prosecution to derail his reform drive.

"The prosecution and the media are trying to make Minister Cho and his wife suspects but they are actually victims," the organizers said. "The real accomplice here is the media, which is writing as the prosecution is saying."

The organizers claimed that around 1.5 million people joined the rally, though police did not provide an estimate.

A separate protest was held across the street to demand Cho's immediate resignation and arrest. Its organizers claimed that around 1,000 people took part in the rally.

More than 3,000 police officers were deployed in the area to stave off any possible clashes between the two groups of protestors.

Cho, known as a key architect of Moon's prosecution reform drive, has been under growing pressure to step down amid various allegations over his family.

His wife is suspected of fabricating a college president's citation for use in her daughter's medical school application. His family also faces a probe over their dubious investment in a private equity fund. The minister denies all of the allegations.

The prosecution has raided dozens of places, including Cho's house, to secure evidence. His wife was indicted while his confirmation hearing was underway.

Cho's appointment as justice minister is seen as a reaffirmation of the president's strong will to push ahead with the reform of the prosecution.

On Friday, President Moon emphasized the need for a far-reaching reform of South Korea's prosecution, including "the way of exercising the prosecution's rights and investigative practices." 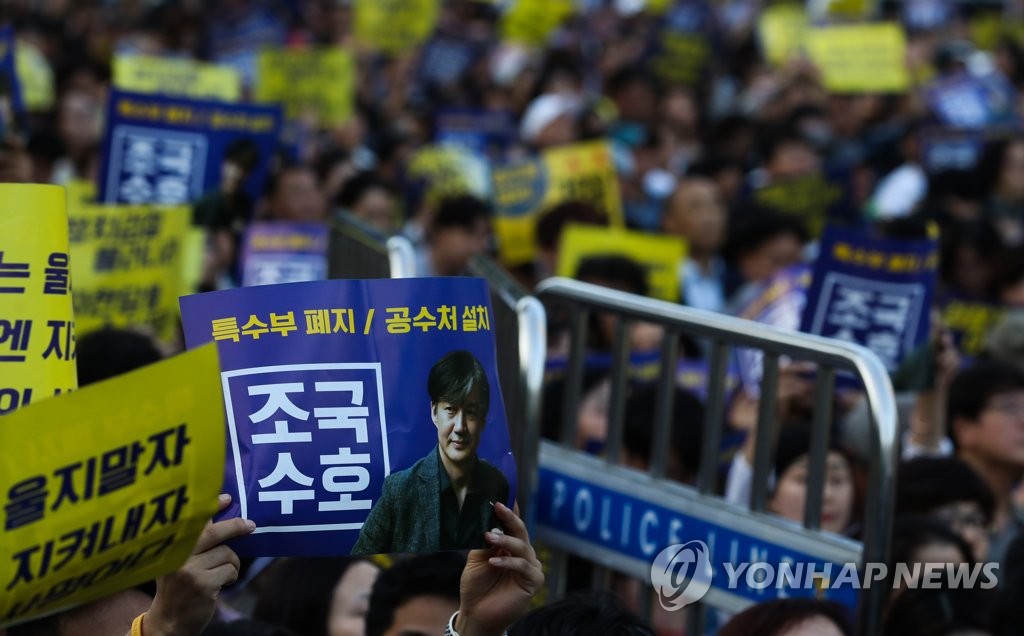