SEOUL, Sept. 29 (Yonhap) -- South Korea is remaining highly vigilant over additional outbreaks of African swine fever and is stepping up disinfection efforts, although there have been no further confirmed cases of the deadly animal disease in the past two days, the country's agriculture ministry said Sunday.

The country has confirmed nine cases of African swine fever since Sept. 17, when the first was reported. There were several suspected cases in the past two days, but all tested negative, according to the ministry.

"Although two suspected African swine fever cases reported in the past two days tested negative, we have to remain vigilant (over additional outbreaks)," Agriculture Minister Kim Hyeon-soo said in a meeting with officials on Sunday.

But there are still concerns that despite containment efforts, the animal disease may spread into regions beyond Gyeonggi Province, Incheon and areas adjacent to the border with North Korea.

The ministry, meanwhile, concluded that a new suspected case at a slaughterhouse in Hongseong, 150 kilometers south of Seoul, was negative.

The ministry concluded that a total of 19 pigs died from suffocation after they were put into the slaughterhouse at the same time.

According to the ministry, Hongseong is home to 2.3 million pigs, around a fifth of the country's 11 million pigs currently being raised, underscoring the fact that the supply of pork may be seriously affected should the suspected cases be confirmed.

On Saturday, a 48-hour lockdown at pig farms, feed factories and related facilities across the country was lifted, but quarantine efforts are still under way to halt the further spread of the highly contagious disease, the ministry said.

As part of preventive measures, the authorities began slaughtering all pigs at farms located in the county of Ganghwa, Incheon, west of Seoul, on Saturday.

Ganghwa is regarded as the most vulnerable region, as five out of the nine confirmed cases have come from there.

A total of 38,000 pigs are subject to the measure, which will bring the total number of pigs culled or to be culled across the country to nearly 90,000, according to the ministry.

Meanwhile, the quarantine authorities are struggling to identify the origin of the deadly virus.

All confirmed or suspected cases have come from northern areas of Gyeonggi Province near the inter-Korean border, but no clear infection route has been identified.

The confirmed cases of African swine fever in South Korea came roughly four months after North Korea reported an outbreak of the disease to the World Organization for Animal Health near its border with China in May.

Earlier, South Korea's spy agency said pigs have been "wiped out" due to the disease in the North's northwestern Pyongan Province.

Seoul's environment ministry said last week it has not found any traces of the deadly virus in water samples gathered from rivers near North Korea. 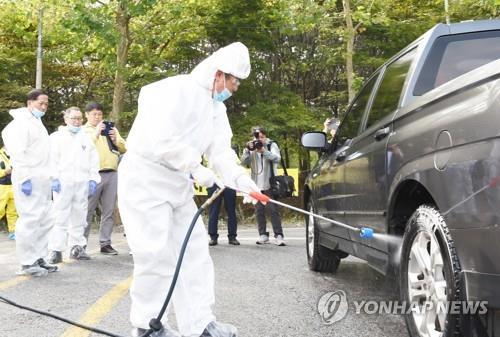