SEOUL, Sept. 30 (Yonhap) -- North Korean leader Kim Jong-un is expected to seek to reaffirm the alliance with China and bolster his negotiating leverage ahead of a resumption of working-level nuclear talks with the United States if he visits Beijing this week, experts said Monday.

Speculation has grown that Kim could travel to the neighboring nation as early as this week, as the two countries are to celebrate the 70th anniversary of establishing diplomatic ties on Oct. 6. On Tuesday, China will mark the anniversary of its foundation as well.

It would be Kim's fifth trip to China since taking office in late 2011 and would come after his latest travel to Beijing in January this year. It would follow Chinese President Xi Jinping's visit to Pyongyang in June, the first such trip by a Chinese head of state to the North in 14 years.

"It is highly likely that Kim will make a trip to China this week given that there are major events that the two countries should celebrate together," Hong Min, a research fellow at the Korea Institute for National Unification, said. "Those anniversaries are good reasons for Kim to pay a visit to China." 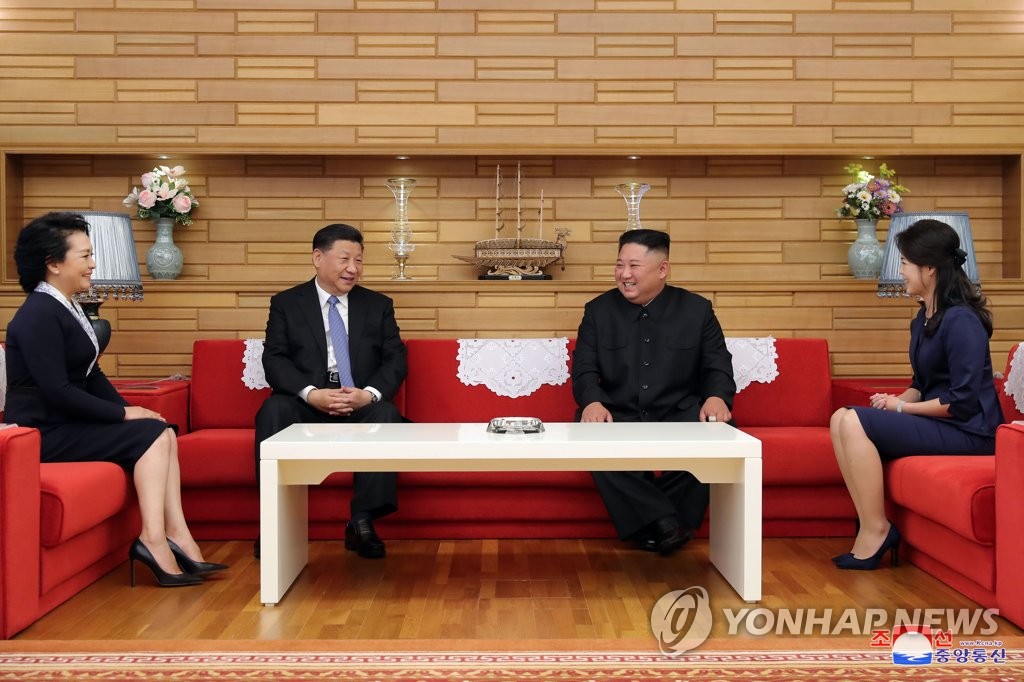 The possibility of Kim's trip to China arose amid expectations that Pyongyang and Washington could resume working-level denuclearization talks within a few weeks.

Nuclear talks have been stalled since February's no-deal second summit between Kim and Trump in Hanoi as they failed to find common ground over Pyongyang's denuclearization and Washington's sanctions relief.

Kim and Trump agreed to resume working-level denuclearization talks "in a few weeks" when they met at the truce village of Panmunjom in late June, but the talks did not materialize as promised.

North Korea later expressed a willingness to hold working-level talks with the U.S. in late September. Though the venue and date for the envisioned meeting have yet to be announced, the two are likely to resume talks in the coming weeks.

Experts said that Kim's trip to China could be used as a way to increase its leverage and put more pressure on Washington against this backdrop.

"If Kim visits China, it could be understood as a means to coordinate and communicate between the allies and increase his leverage by boasting of their strong ties ahead of talks between Pyongyang and Washington," Kim Yong-hyun, a professor at Seoul-based Dongguk University, said.

There have been signs that Kim's China trip might be forthcoming, with high-ranking North Korean officials seen visiting major Chinese cities and security along their border being beefed up.

According to the Chinese government, Yon said North Korea "is willing to join China in strengthening multifaceted exchanges and cooperation, and promote new development in the relations between the two countries and militaries."

Last month, Kim Su-gil, director of the General Political Bureau of the North's Korean People's Army, led a delegation to Beijing to meet his counterparts.

Chinese Foreign Minister Wang Yi added to the speculation as he visited Pyongyang and met with his North Korean counterpart and other senior officials earlier this month.

North Korea and China have been engaged in active summit diplomacy since early last year following years of relatively chilled ties amid frictions over Pyongyang's missile and nuclear tests.

Through their five summits -- four in Beijing and one in Pyongyang -- they have highlighted their close ties and agreed to cooperate on regional issues, including denuclearization of the Korean Peninsula.

In particular, Kim traveled to Beijing in May last year just a month before his historic summit with U.S. President Donald Trump in Singapore, a move deemed to be intended for strategic coordination and to secure support from the ally before high-stakes denuclearization talks.

"As shown in the previous pattern, Kim could travel to China and emphasize his strong ties with the country before the resumption of talks with Washington," Hong of the Korea Institute for National Unification said.

It is still unclear whether Kim will actually visit China this week. North Korean media has rarely reported in detail on Kim's overseas trips in advance and usually stayed mum until the last moment about its leader's overseas schedules.

Asked about Kim's possible trip to China during last week's press meeting, Geng Shuang, spokesperson of China's foreign ministry, did not provide a direct answer, only emphasizing the friendly ties between the two countries.

Some raised the possibility that instead of Kim's trip to Beijing, high-ranking Chinese officials, such as Chinese Premier Li Keqiang, could make a trip to Pyongyang on the occasion of the upcoming national holidays.