The 30-year-old started his mandatory military service at a boot camp of the Army's 21st Division in Yanggu, Gangwon Province, as an active duty soldier.

"I am really grateful (to the fans) and will be back safely," Lee told journalists and fans who came to the site of his enlistment.

"I will be safeguarding my voice as I promised. ... We will meet again someday," he said, bidding farewell.

Some 500 South Korean and foreign fans came all the way to the small border town, some from as far away as Russia, Hong Kong or China, to see the star off.

Lee debuted in 2007 as one of the main vocalists of F.T. Island. He is the first F.T. Island member to begin mandatory military service. 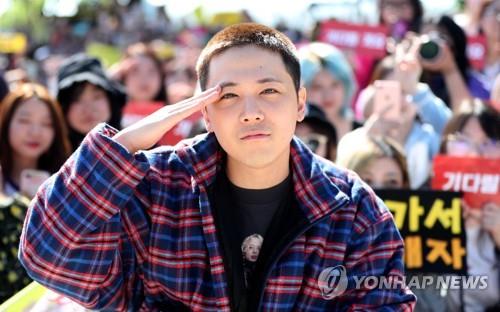