SEOUL, Oct. 1 (Yonhap) -- South Korea showcased its F-35A stealth fighters to the public for the first time during the Armed Forces Day ceremony Tuesday to officially mark the introduction of the radar-evading high-tech fighters that North Korea has angrily protested.

South Korea has so far brought in eight F-35As, beginning with two in late March, under a plan to deploy 40 fifth-generation jets through 2021. But it has handled their arrivals in a low-key manner, sparking speculation Seoul is concerned about resistance from North Korea.

During the ceremony to mark the 71st Armed Forces Day held at the Air Force's 11th Fighter Wing base in the southeastern city of Daegu, four of the eight next-generation fighters were mobilized "to show the military's prowess," according to the defense ministry.

One was on display, along with the country's key strategic military assets, to be inspected by President Moon Jae-in, and three conducted a ceremonial flyby.

By the end of this year, South Korea is expected to introduce 13 F-35As, and it is reviewing an option to buy 20 more units, according to the officers.

North Korea has intensified its criticism against South Korea for the introduction of such advanced weaponry, claiming that such a military buildup is aimed at destroying North Korea and threatens peace on the Korean Peninsula and in the region. 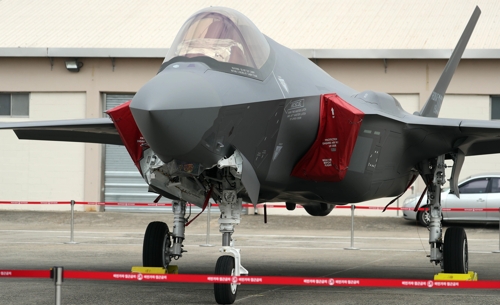 Also mobilized for the event were around 60 military aircraft, including F-15K fighter jets, as well as key weapons from the Army, the Navy and the Air Force, such as the Patriot Advanced Capability (PAC)-3 missiles, the M-SAM surface-to-air missiles, the Haeseong-2 long-range anti-ship cruise missiles, the K-9 self-propelled howitzers and the Army Tactical Missile System (ATACMS) missiles.

President Moon Jae-in arrived at the air base on a Surion, one of the country's indigenous helicopter, which aims to demonstrate the stability of the vehicle and the excellence of the country's defense industries, according to the defense ministry.

"The focus of this event was to show to the people the readiness and capabilities of our strong armed forces. We hope that the people feel our overwhelming forces armed with cutting-edge technologies," the ministry said in a release. 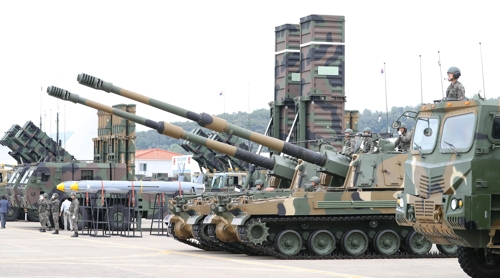 After a 18-month hiatus, North Korea resumed its major weapons tests in May and has since launched short-range projectiles in succession, involving short-range ballistic missiles.

Seoul's defense ties with other neighboring countries are also far from stable. Relations between Seoul and Tokyo have remained at the lowest ebbs in years over historic and diplomatic rows. In July, a Russian warplane violated South Korean airspace twice in the East Sea, prompting the South Korean Air Force to fire hundreds of warning shots.

In the wake of such incidents, Defense Minister Jeong Kyeong-doo has called for strong military capabilities "to ensure peace."

Tuesday's event was attended by some 3,000 people, including the top commanders of the country's armed services. U.S. Forces Korea Command commander Gen. Robert Abrams did not attend the ceremony, as he is in the United States for other plans, according to the ministry.

It is the first time that an Armed Forces Day ceremony has been held at an air combat command. Officials said it is to better mark the 70th anniversary of the foundation of the Air Force that falls on the same day. 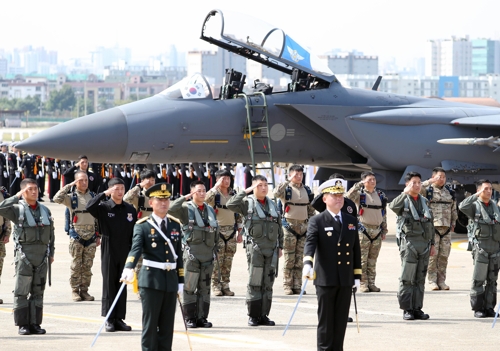