South Korea's Vice Defense Minister Park Jae-min left for Abu Dhabi earlier in the day to meet with his UAE counterpart, Matar Salem Al-Dhaheri, on Wednesday, during which the two sides are scheduled to exchange their assessments of regional security issues and discuss ways to boost bilateral defense ties, according to the ministry.

The two countries launched a defense deputy minister-level consultative body in 2010. As relations were upgraded to a special strategic partnership last year, the meeting is to be attended by their vice ministers, the ministry noted.

Before returning home Friday, Park will visit the Akh special forces unit stationed in the Middle Eastern country, according to the ministry. The 140-strong unit has been there since 2011 to help train local troops.

Seoul and Abu Dhabi established diplomatic ties in 1980 and have since maintained close ties. 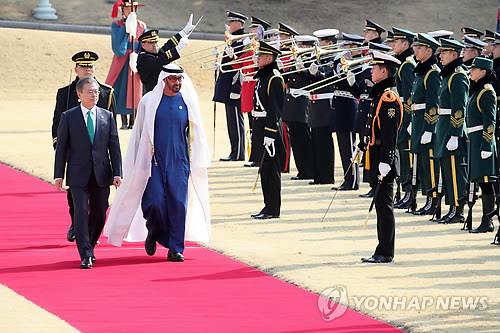