In a poll of 2,506 adults nationwide conducted by Realmeter from Sept. 23-27, Lee, a liberal politician, was favored by 20.2 percent of the respondents, topping its list of 14 prospective presidential hopefuls.

Hwang, a conservative who served as the prime minister from 2015 to 2017 before jumping into politics last year, was supported by 19.9 percent, the pollster said.

Notably, Cho Kuk, the scandal-hit justice minister, ranked a distant third by garnering support from 13 percent, Realmeter said, adding he was included in its poll on prospective presidential candidates for the first time. 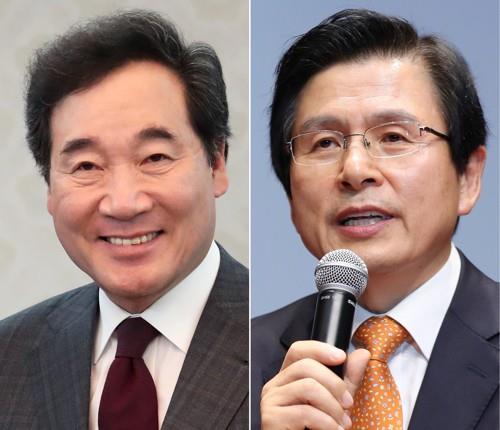 In a similar poll carried out by the same pollster in August, Lee and Hwang were supported by 25.1 percent and 19.5 percent, respectively. Lee suffered a loss of 4.9 percentage points over the past month, halting his sixth consecutive monthly rally, whereas Hwang gained 0.4 percentage point in the same period. The poll has a margin of error of plus or minus 2 percentage points with a confidence level of 95 percent.

"Cho appears to have absorbed support of floating voters from both ruling and opposition camps. The prospective presidential race has turned into a two-way competition between Lee and Hwang, with Cho catching up with them," a Realmeter official said.

Meanwhile, Gyeonggi Province Gov. Lee Jae-myung ranked fourth with 6 percent support, down 1.9 percentage points from a month ago, and former LKP chairman Hong Joon-pyo was fifth with 4.5 percent, down 0.9 percentage point from August, according to Realmeter.