SEOUL, Oct. 1 (Yonhap) -- A group of international lawyers urged South Korea to send a group of North Korean restaurant workers back to the communist nation after concluding that the South's then government orchestrated their 2016 defection after abducting them.

The 12 North Korean waitresses, employees of a restaurant in China, defected to the South, along with a male manager. In an unusual move, the government immediately released the news of the massive defection, just five days ahead of general elections, raising speculation that the authorities might have pulled the strings behind the rare group defection.

In the final report of their probe into the case released Monday, the lawyers concluded that the North Koreans were the victims of an abduction and called on Seoul to repatriate them. They also recommended that the South compensate the women and their families and that the officials involved to be punished.

"The Joint Fact Finding Committee condemns the act of the collective kidnapping of the 12 young women restaurant employees and the ruthless and calculated manner in which it was carried out, with base political motives," they said in the report.

The South Korean government, however, has said that there was no state-level coercion in the process of their defection, stressing that all individuals' willingness to come to the South was confirmed before their arrival here.

Last month, the National Human Rights Commission announced the results of its yearlong investigation and said there is a lack of evidence to confirm the government's intervention in the defection.

The watchdog, however, recommended that the government better protect defectors' human rights and reveal how the decision to release the news was made in 2016. 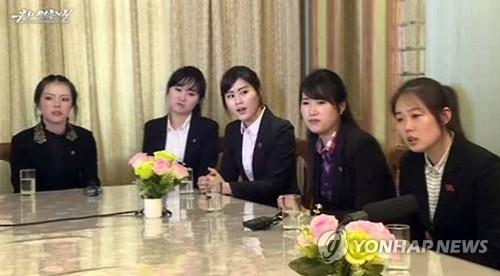