Mitag, the season's 18th typhoon and the seventh to affect the Korean Peninsula this year, was previously expected to make landfall in southwest South Korea around 9 a.m. Thursday.

In its latest weather update, however, the Korea Meteorological Administration (KMA) said the arrival of the mid-strength typhoon on South Korea's mainland is expected to occur around midnight Wednesday, adding it will then pass over the nation's southern regions before exiting to the East Sea on Thursday afternoon.

Mitag was moving north from waters 290 kilometers south-southeast of Shanghai at a speed of 22 kph as of 4 p.m. Tuesday. 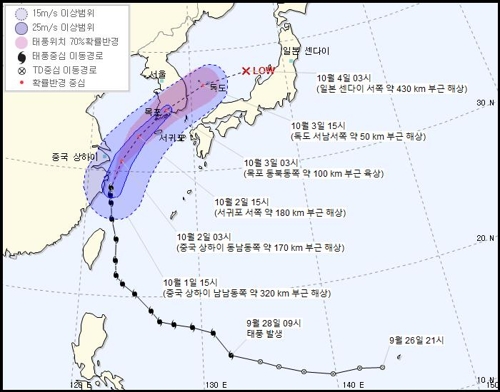 "Typhoon Mitag is heading north along the edge of the North Pacific high pressure. Due to a slight contraction of the high pressure, the degree of the typhoon heading west has weakened, thus cutting short its route towards the Korean Peninsula," a KMA official said.

The typhoon lost strength Tuesday as it passed over waters with temperatures below 27 degrees Celsius, the KMA said, noting that Mitag will weaken to a small-scale typhoon by the time of its landfall in South Korea.

"In strength, Mitag will be similar to or weaker than the season's 17th typhoon Tapah that passed over the sea between Korea and Japan. As Mitag will make landfall, however, its impact will likely be much stronger and more extensive," the official said. 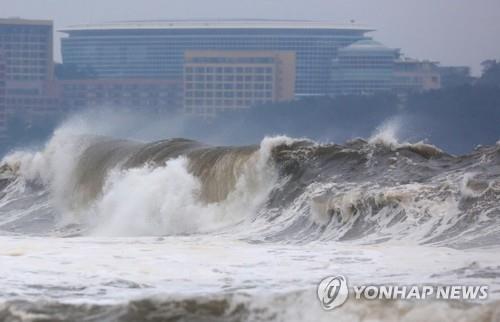 The KMA has issued heavy rain warnings for Jeju Island and the southwestern provinces of Jeolla, forecasting 100 to 300 millimeters of rainfall in those areas by Thursday.

Precipitation in some mountainous locations of Jeju and eastern coastal areas of Gangwon Province and North Gyeongsang Province can reach up to 600 mm, the agency said.

The amount of rainfall in the central provinces of Chungcheong is expected to reach 80 to 150 mm, while the other areas of the nation, including Seoul, is likely to receive 30 to 80 mm of rainfall, it added.

The weather agency also forecast the maximum instantaneous wind speeds of 35 to 45 meters per second, or 125 to 160 km per hour, in Jeju Island and many other island and coastal areas in the nation's southwest under the influence of the typhoon.

The peak instantaneous wind speed will range from 15 to 30 meters in other areas, it said, asking local farmers and officials to make thorough preparations for strong winds and heavy rain.