SEOUL, Oct. 1 (Yonhap) -- The leader of the main opposition Liberty Korea Party voluntarily appeared at a district prosecutors office on Tuesday over the party's involvement in the political bickering over the passage of so-called fast-track bills.

Hwang Kyo-ahn arrived around 2 p.m. at the Seoul Southern District Prosecutors Office. According to an official of the party, Hwang made the appearance in lieu of its lawmakers, to whom the prosecution has sent notifications asking them to appear for questioning as part of its probe into a score of cases involving a vehement row. 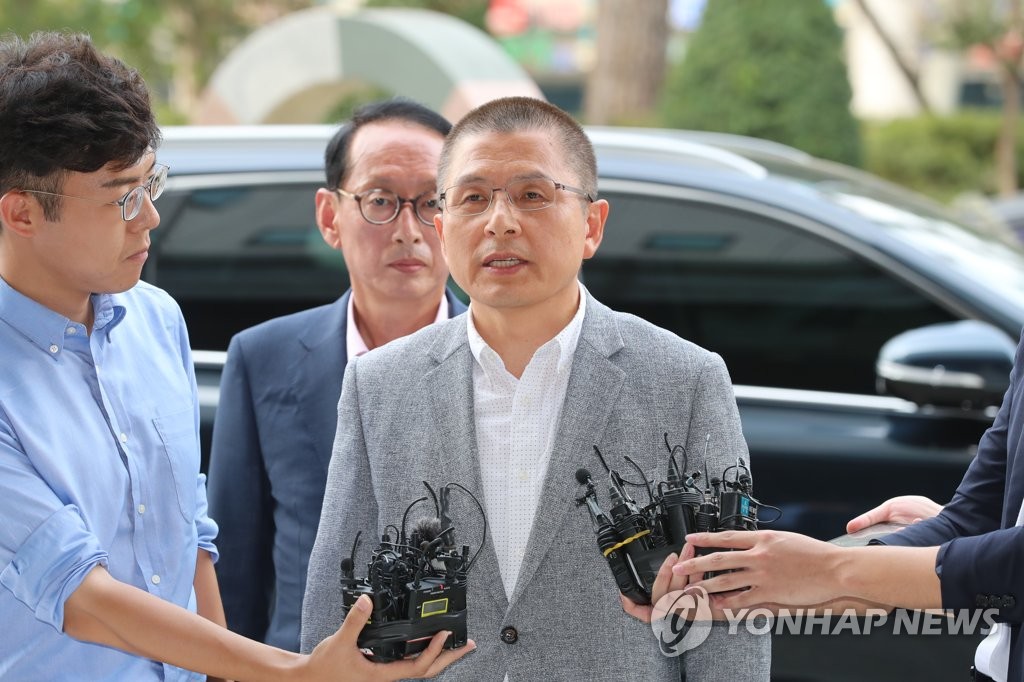 In April, the ruling Democratic Party, in collaboration with minor opposition parties, including the center-right Bareunmirae, fast-tracked several reform bills, including one aimed at setting up a special presidential unit to investigate corruption by high-ranking officials.

The move triggered strong physical resistance from the main opposition Liberty Korea Party (LKP), including Bareunmirae Rep. Chae Yi-bae being forcibly confined to his office for five hours. Following the scuffle, rival parties lodged a total of 18 complaints, including libel, against each other's lawmakers.

After arriving at the prosecutors office, Hwang called for the prosecution to stop the probe into the party's lawmakers and expressed his intention to take responsibility over it if any.

"I said to LKP lawmakers, 'Do not appear at investigative agencies. You just followed the instructions of your party's leader,'" Hwang told a group of reporters.

Urging President Moon Jae-in to stop suppressing the opposition, Hwang said, "Don't interfere in the prosecution's investigation and concentrate on resolving the controversy of Cho Kuk." He was referring to the prosecution's probe into allegations of corruption involving Justice Minister Cho Kuk's family.

The LKP has demanded that Moon retract his appointment of Cho amid partisan wrangling over whether Cho is qualified to lead the justice ministry as the prosecution is probing into his family over corruption suspicions.

The main opposition party has demanded that the prosecution first summon National Assembly Speaker Moon Hee-sang, who it claims caused the scuffle to happen, with no LKP lawmaker responding to the police's request to attend questioning for their earlier probe of the fast-track cases.

Moon submitted an affidavit to the district prosecutors office on Sept. 24, when the investigation was referred to the prosecution from the police, and the office sent notifications to 20 lawmakers asking them to appear for questioning at the prosecution scheduled for Tuesday through Friday.

Hwang and the party's floor leader Na Kyung-won were not among those who were summoned. The prosecution plans to call in around 60 LKP lawmakers over the probe over the next few weeks.