SEOUL, Oct. 3 (Yonhap) -- First came a rubber duck. Then came a supermoon, a pair of swans and a human-shaped figure. This year, it's going to be a group of monsters that shimmer under moonlight.

The exhibition, called the Luna Project, is the latest in a series of larger-than-life figures that have decorated the lake. The floating works have become an annual fixture after Lotte in 2014 installed Dutch artist Florentijn Hofman's yellow rubber duck work in line with the opening of the skyscraper Lotte Tower.

This year's exhibition celebrates the 50th anniversary of the Apollo 10 mission, which was considered a dress rehearsal for the Apollo 11 mission when Neil Armstrong became the first human to set foot on the moon. The lunar module that "snooped around" the landing site was nicknamed Snoopy while the command module got the name Charlie Brown after the Peanuts duo. 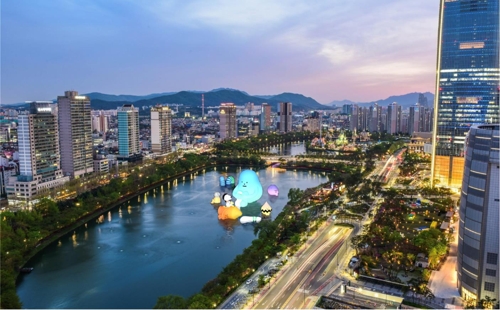 At the center of the lake exhibition will be a blue monster measuring 16 meters in height and wearing only one sock. Smaller figures depicting the moon, the command module and the landing module will be installed around "Earthmon."

Taking a cue from the modules' nicknames, figures of Peanuts characters Snoopy and Woodstock will sit on one of the yellow monsters. A water drop-shaped figure wearing Charlie Brown-themed clothing and a worm-shaped figure will also be on display with a message on saving the Earth, according to the organizers.