Their lackluster sales were mainly due to lower demand in China and emerging markets and uncertainties surrounding a yearlong trade battle between the United States and China -- the world's two biggest automobile markets. 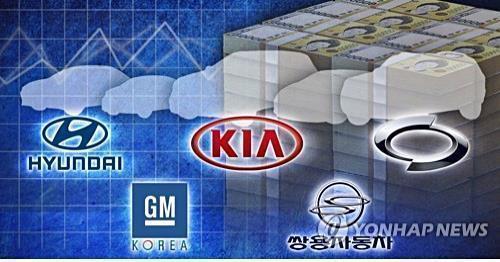 Looking ahead, they said a slowing global economy and an escalating trade war between Washington and Beijing will further add uncertainties to their businesses during the remainder of the year.

Hyundai, the maker of the Sonata sedan and the Santa Fe sport utility vehicle, expects its Palisade SUV, which has been available in U.S. dealerships since this summer, to help boost sales in the second half.

Kia, which is 34 percent owned by Hyundai, expects the Telluride SUV will give a boost to its annual sales. The Telluride is manufactured in Kia's U.S. plant and sold in North American markets only.

The two, which aim to achieve their sales target of 7.55 million vehicles for this year, sold a combined 5.27 million units from January to September, down 3 percent from 5.44 million units in the year-ago period, the data showed.

GM Korea posted the biggest plunge in September sales as its workers held several rounds of strikes, resulting in output losses of over 10,000 vehicles. Its sales plunged 39 percent last month to 21,393 from 34,816 a year ago.

GM Korea and its 10,000-member union have yet to bridge a gap running deep between them over wages.

From January to September, the five firms' overall sales were down 3.9 percent to 5.81 million from 6.05 million in the same period of last year, the data showed.

Keywords
#carmakers-Sept. sales
Issue Keywords
Most Liked
Most Saved
Most Viewed All Categories
Most Viewed More
Most Viewed Photos