SEOUL, Oct. 1 (Yonhap) -- South Korea's defense ministry on Tuesday rejected Japan's renewed territorial claim to the South's easternmost islets of Dokdo and vowed to respond sternly to any attempts to infringe on its rights.

Earlier in the day, Japan called in a South Korean military attache stationed in the country and lodged a complaint over South Korean F-15K fighter jet's patrol flight over Dokdo as part of the ceremony to mark the 71st Armed Forces Day.

"As Dokdo is our inherent territory historically, geographically and by international law, Japan's claim does not deserve any consideration," the ministry said in a release.

"We strongly protest the unfair claim repeated by Japan, and sternly urge it to stop repeating such an act," it added, noting that the attache also delivered such a stance clearly to Japan.

Japan's renewed territorial claim came at a time when the Seoul-Tokyo ties have plunged to their lowest ebb in years over Japan's export restrictions on South Korea. The restrictions are seen as political retaliation for last year's Supreme Court rulings here against Japanese firms over wartime forced labor.

South Korea maintains a small police unit on the pair of rocky outcroppings to show its effective control over the land. 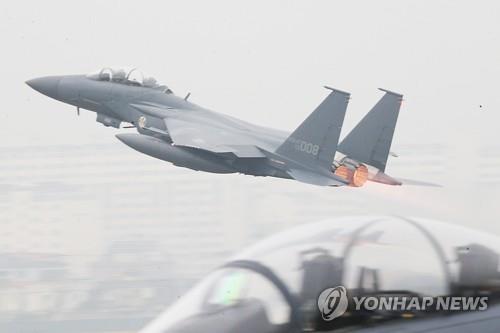