SEOUL, Oct. 1 (Yonhap) -- In one of the most improbable finishes in league history, the Doosan Bears claimed the 2019 regular season crown in the Korea Baseball Organization (KBO) with a walkoff victory on Tuesday.

Park Sei-hyok delivered the game-winning single with two outs in the bottom of the ninth inning, as the Bears defeated the NC Dinos 6-5 at home, Jamsil Stadium in Seoul.

The Bears finished with a record of 88-55-1 (wins-losses-ties). They have the identical record as the SK Wyverns but took first place by virtue of winning the season series, 9-7. The Bears are the first club to take the regular season title in a tiebreaker. 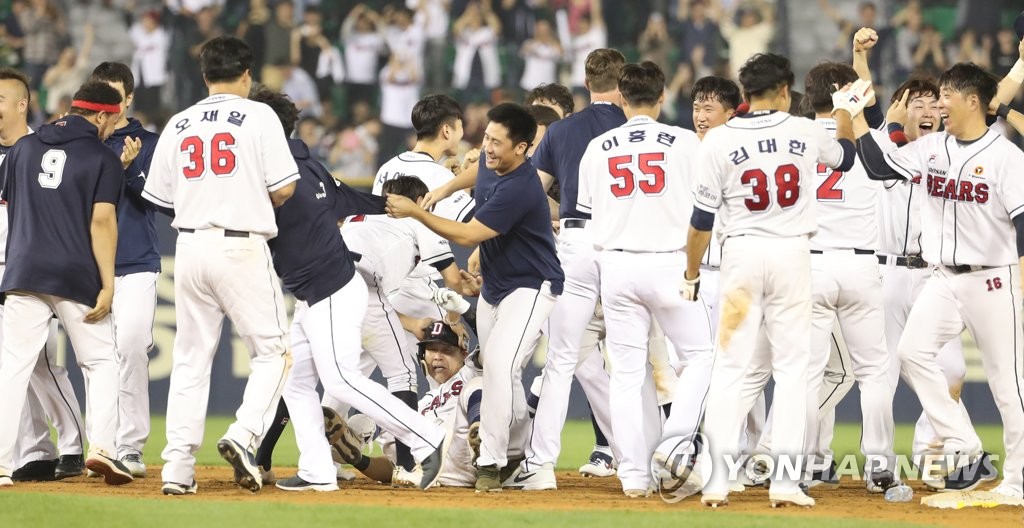 The Bears will advance directly to the Korean Series, and it will be their fifth straight appearance in the KBO's championship round.

The Bears erased the largest-ever deficit to win the KBO regular season title. They were nine games behind the Bears in third place on Aug. 15. The previous record for the biggest margin was seven games, overcome by the Samsung Lions in 2011.

This was only the third time in the KBO that the regular season winner was decided on the final day.

The Wyverns, who had been alone or joined at the top of the 10-team league standings every day since May 30, slipped a notch on the final day of the season. The Wyverns played their last regular season game on Monday, and defeated the Hanwha Eagles 6-2 to take care of their business and put pressure on the Bears to win.

And the Bears matched the Wyverns' win with a gutsy performance.

They were down 2-0 through four innings, before Park Kun-woo's RBI single in the fifth cut the deficit to 2-1.

The Bears then tied things up at 2-2- in the bottom seventh on a wild pitch.

The Dinos responded with three runs in the top of the eighth inning for a 5-2 lead. But just when it seemed their fate was sealed, the Bears rallied with three runs of their own in the bottom eighth, highlighted by Kim In-tae's game-tying triple. 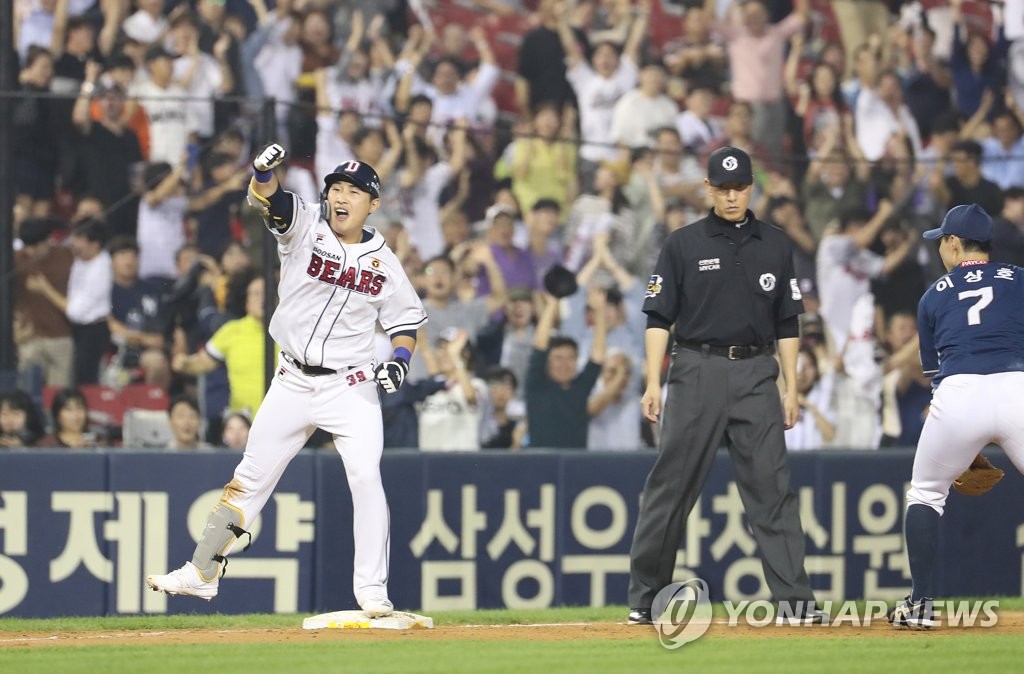 With two outs in the bottom ninth, Kook Hae-seong kept the Bears' hope alive with a double. That set the stage for Park's heroics, as the catcher drove in the winning run with a single up the middle.

By directly advancing to the Korean Series, the Bears will have about three weeks off.

Some teams have handled the rust of long breaks better than others, and the Bears are no strangers to the extended layoff. This will be their fifth consecutive appearance in the Korean Series. They won it all in 2015 and 2016, but came up short in the past two years. They lost to the Wyverns in six games, despite finishing first in the regular season by 14.5 games.

They'll now have a chance to snap their Korean Series losing streak at two. Whether they'll also get to avenge a loss to the Wyverns remains to be seen, since the Wyverns, who stumbled to the finish line with a 21-22 record in August and September, may not even reach the Korean Series.

As the second seed, the Wyverns advanced to the second round of the playoffs, a best-of-five affair. They will await the winner of the first round, which will be against the third seed Kiwoom Heroes and the wild card winner.

The fourth- and fifth-ranked teams, LG Twins and NC Dinos, will meet in the wild card game on Thursday.