A 65-year-old female owner of a small restaurant was found dead at around 4 p.m., about seven hours after being buried in a landslide in the southeastern port city of Busan.

Fire officials in Busan said a son of an old couple was also found dead after he was buried in the landslide along with his parents at their home.

President Moon Jae-in wrote in a Facebook message that his heart aches over the deaths and asked people to offer consolation and support to those affected by the typhoon. Moon said the government is mobilizing all its resources to recover from the damage.

Earlier in the day, a woman in her 70s died after being swept away by strong currents in the southeastern city of Pohang.

In Samcheok, Gangwon Province, heavy precipitation caused a landslide, which brought down a wall of a house, killing a woman sleeping inside. A similar accident took place in the southeastern county of Yeongdeok, killing one, according to the disaster authorities. 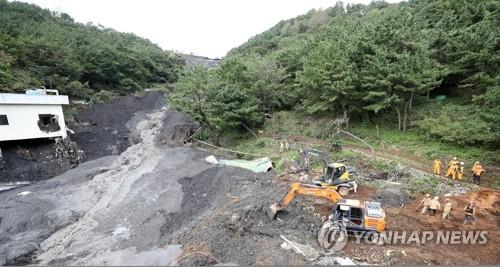 On Wednesday, a 76-year-old man was killed after he was swept away by strong currents in a farming village in Seongju, North Gyeongsang Province.

Two people also went missing amid heavy rains, and several others suffered injuries, the authorities said, adding that more than 1,500 people on the southern island of Jeju and other southeastern regions were evacuated to emergency shelters.

A sightseeing train in Bonghwa, North Gyeongsang Province, derailed due to a landslide and more than a dozen sections of streets were closed because of heavy rain.

Flights returned to normal operations at 6 a.m., but 83 passenger ferries on 65 sea routes are still suspended, according to the authorities.

The mid-strength typhoon, the seventh to affect the Korean Peninsula this year, brought heavy rain and high winds to the southern regions even before making landfall. Several regions experienced record high levels of precipitation.

Typhoon Mitag dumped 555.6 millimeters of rain on Uljin, North Gyeongsang Province, between midnight Tuesday and 10 a.m. on Thursday. Precipitation reached 104.5 millimeters per hour in Uljin between 00:31 a.m. and 1:30 a.m., the highest since the authorities began compiling data on Uljin in 1971.

The city of Donghae, Gangwon Province, saw 67.4 mm of rain per hour, marking the highest figure since 1992, according to the Korea Meteorological Administration,

"High waves are forecast to continue into Saturday off the east coast," the KMA said, asking for special attention to prevent damage and accidents.

In some regions, officials and residents began working to recover from the impact of the typhoon.

More than 44,000 homes suffered power outages due to the typhoon, and power to some 82 percent of them has been restored so far.

The land ministry said it is set to start the safety check and maintenance work of all roads until the end of this month.

Prime Minister Lee Nak-yon called for the full employment of personnel and equipment available to rescue those buried in a landslide incident in Busan and safety measures to be taken in the aftermath of the typhoon, according to his office. 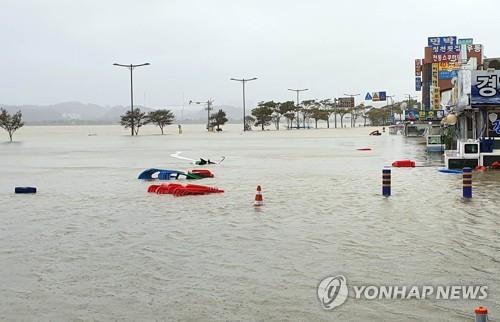