SEOUL, Oct. 3 (Yonhap) -- Hundreds of thousands of South Koreans took to the streets in downtown Seoul Thursday calling for the ouster of Justice Minister Cho Guk as prosecutors questioned Cho's wife as part of a widening probe into corruption allegations surrounding the family. 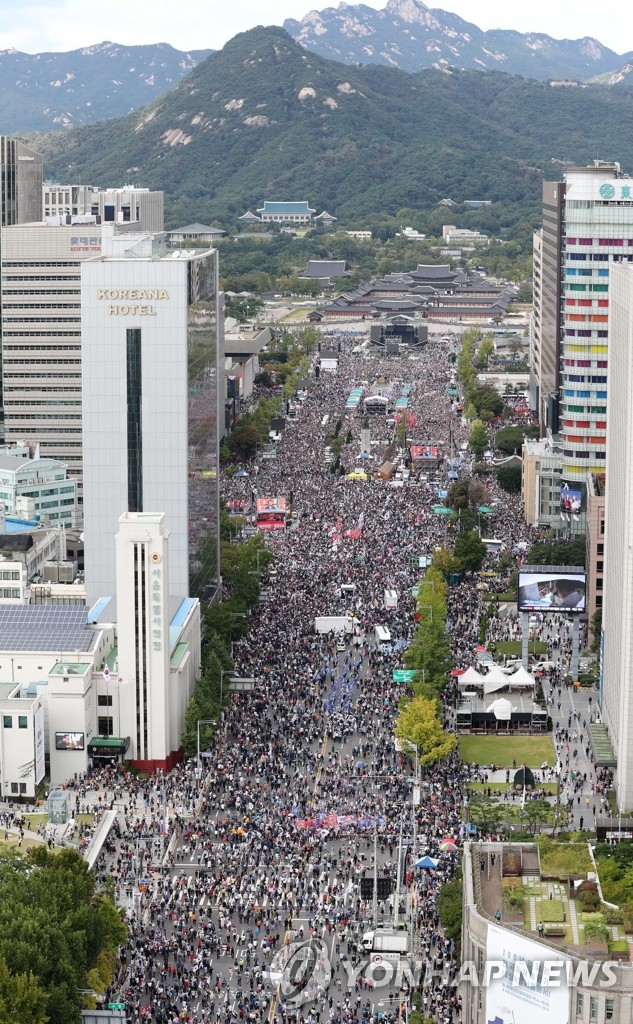 The conservative party estimated the turnout at 3 million participants, in the capital city of 10 million people, in what could be the largest demonstration since before the 2017 impeachment of Moon's predecessor, Park Geun-hye.

Police did not estimate the turnout.

Cho -- known as a key architect of Moon's prosecution reform drive -- has been under mounting pressure to quit over ethical lapses and a series of allegations in connection with his family's investment in a private equity fund and his daughter's school admissions.

Moon appointed Cho, a former law professor and former presidential secretary for civil affairs, as justice minister Sept. 9 despite strong objections from the main opposition party and other critics.

The appointment has deepened the divide in South Korea as the main opposition party calls for his dismissal while the ruling party and Cho's supporters call for reform of the prosecutorial system.

On Thursday, some of the participants chanted "arrest Cho Kuk" during the massive demonstration in central Seoul.

Police deployed some 5,400 personnel near Gwanghwamun Plaza and other adjacent areas. No clashes were reported.

On Thursday, prosecutors questioned Cho's wife, a university professor surnamed Chung, for eight hours. They said they plan to call her in for further questioning without elaborating on a date.

On Sept. 6, Chung was indicted on charges of fabricating a college president's citation to be used for her daughter's medical school application.

Chung is also suspected to have directly been involved in the investment and management in the company operating the equity fund to which she and her children invested a total of 1.05 billion won (US$872,000) in July 2017.

Cho's supporters plan to hold a candlelight vigil on Saturday in southern Seoul near the Supreme Prosecutors Office. The supporters have held similar weekend rallies twice, on Sept. 21 and Saturday last week. 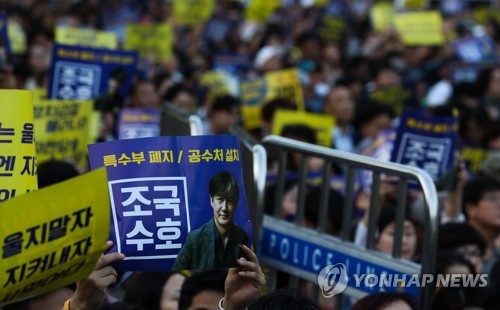