BUSAN, Oct. 2 (Yonhap) -- Busan International Film Festival (BIFF), Asia's largest film festival, has canceled its pre-opening event slated for Wednesday evening, due to the approach of Typhoon Mitag, according to its organizers.

The organizers announced the cancellation of the official event that had been scheduled for 6 p.m. on the eve BIFF's 24th edition in the port city of Busan, about 450 kilometers southeast of Seoul, citing inclement weather conditions caused by the typhoon. 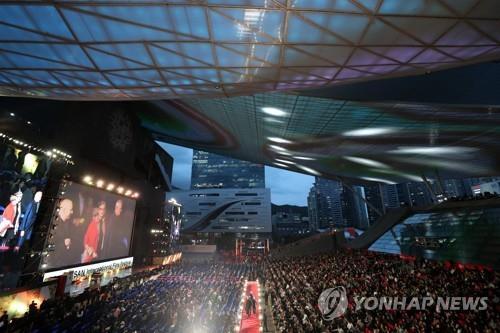 But the opening ceremony of this year's BIFF will take place Thursday evening as scheduled, they said. The 24th BIFF will continue through Oct. 12 at five cinemas, including the Busan Cinema Center, and will feature 303 films from 85 countries.

The KMA forecast 100 to 300 millimeters of rain and a maximum wind speed of 35 to 45 meters per second in Busan, as Typhoon Mitag is expected to land on South Korea's southwestern coast at between 9 p.m. and 10 p.m. Wednesday before passing over the southeastern port city early Thursday morning.

At Gimhae International Airport, the gateway to Busan, 71 flights, including 12 international flights, were canceled due to the typhoon.

In anticipation of prolonged flight disruption, the secretariat of BIFF said it has chartered a KTX train to transport special guests from Seoul Station on Thursday morning.

"Considering the latest weather forecasts, the opening ceremony set to kick off at 6 p.m. Thursday won't be affected by the typhoon. Due to the possibility of flight disruption, a special KTX train has been chartered," a secretariat official said, noting that about 300 guests, including actors, directors and film production officials, will attend the opening ceremony. 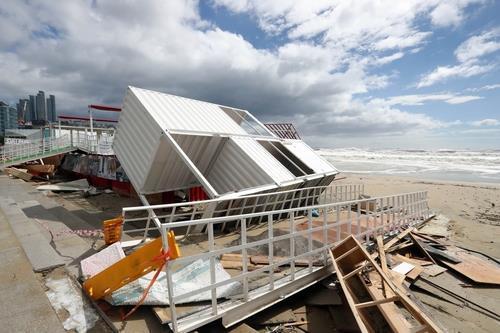 The BIFF secretariat has also removed BIFF promotional structures and banner ads installed throughout Busan to prevent damage from the approaching typhoon.

In 2013, 2016 and 2018, typhoons dealt a blow to some BIFF events. Last year, Typhoon Kong-rey forced cancellations of some outdoor BIFF events. In 2016, Typhoon Chaba destroyed the BIFF Village set up on Haeundae beach, where various press conferences and hand-printing events had been scheduled for participating actors and filmmakers.