The unarmed Minuteman III ICBM, equipped with a test reentry vehicle, was launched from Vandenberg Air Force Base, California, at 1:13 a.m. Wednesday (local time), the Air Force said on its website. The missile's dummy warhead traveled approximately 4,200 miles before landing at Kwajalein Atoll in the Marshall Islands.

"The test demonstrates that the United States' nuclear deterrent is robust, flexible, ready and appropriately tailored to deter 21st century threats and reassure our allies," it said, adding that test launches "are not a response or reaction to world events or regional tensions." 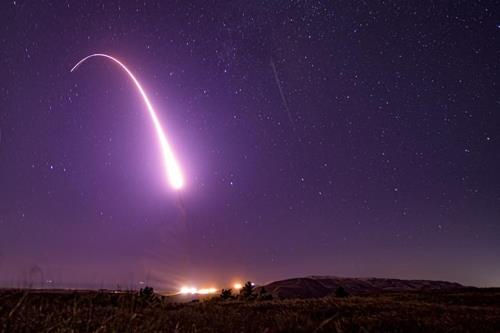 Some 10 hours earlier, North Korea fired a presumed SLBM from waters off its east coast, according to South Korea's military, raising tensions ahead of the expected resumption of working-level talks with the U.S. on denuclearization this weekend.

Analysts said the North appeared to be strengthening its negotiating hand before facing off with the Americans on what concessions it will receive in exchange for dismantling its nuclear and ballistic missile program.

The negotiations have been stuck in limbo since February's second summit between U.S. President Donald Trump and North Korean leader Kim Jong-un ended without any agreement.

The Air Force said launch schedules are built three to five years in advance, and planning for each individual launch begins six months to a year before the test.

"The Minuteman III is nearly 50 years old, and continued test launches are essential in ensuring its reliability until the mid-2030s when the Ground Based Strategic Deterrent is fully in place," said Col. Omar Colbert, 576th Flight Test Squadron commander. "Most importantly, this visible message of national security serves to assure our partners and dissuade potential aggressors."