WASHINGTON, Oct. 2 (Yonhap) -- The chairmen of the Joint Chiefs of Staff of South Korea, the United States and Japan agreed to address mutual security concerns during their meeting in Washington this week, the U.S. JCS said Wednesday.

The trilateral meeting on Tuesday -- involving South Korea's JCS Chairman Gen. Park Han-ki and his U.S. and Japanese counterparts, Gen. Mark Milley and Gen. Koji Yamazaki -- came amid tensions over Seoul's decision to pull out of a military intelligence-sharing pact with Tokyo. 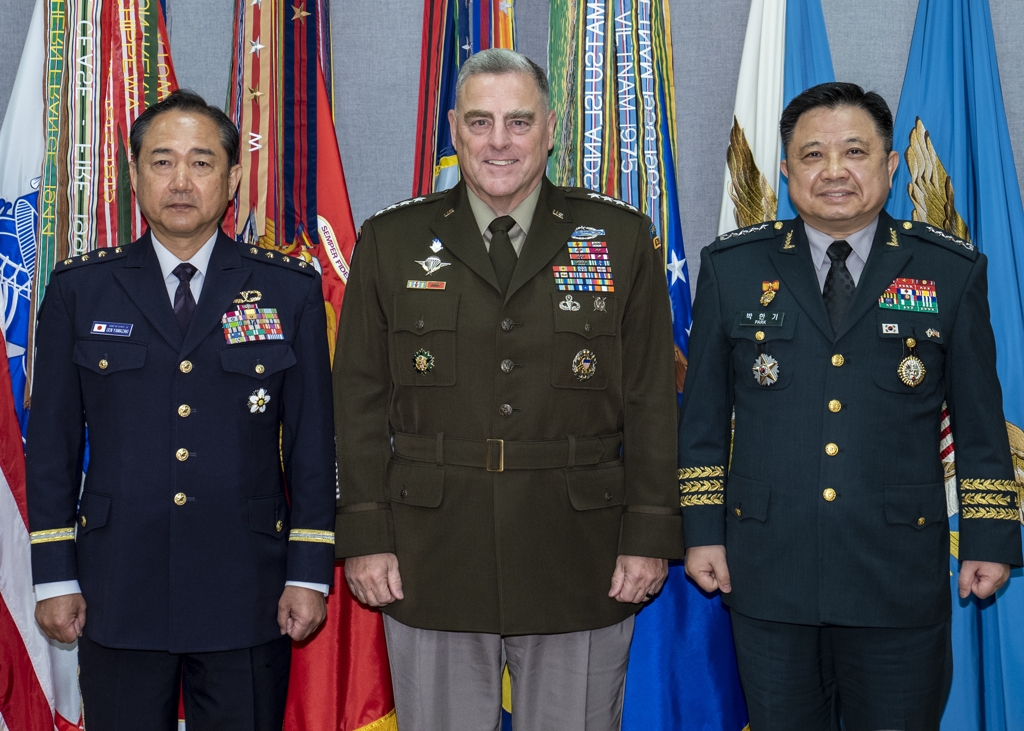 The talks were arranged by the U.S. as Park and Yamazaki were in Washington to attend the change of command ceremony for new chairman Milley on Monday.

"The meeting focused on multilateral cooperation that ensures readiness to respond to any regional contingency and promotes long-term peace and stability in northeast Asia," Milley's office said in a statement. "The senior military leaders agreed to address mutual security concerns and utilize multilateral cooperation to enhance regional peace and stability."

The U.S. has repeatedly called on South Korea to reconsider its decision to terminate the General Security of Military Information Agreement with Japan considering the mutual interests of the three countries in countering North Korea's nuclear threats and China's military rise.

Hours after the meeting took place, North Korea fired what appeared to be a submarine-launched ballistic missile from waters off its east coast.

At the meeting, "Gen. Milley reaffirmed the ironclad commitment of the U.S. to defend both the ROK and Japan if called upon and to provide extended deterrence guaranteed by the full spectrum of U.S. military capabilities," the statement said, referring to South Korea by its official name, the Republic of Korea.

It made no direct mention of GSOMIA.

Meanwhile, the defense ministers of South Korea, the U.S. and Japan also plan to hold a trilateral meeting during the ASEAN Defense Ministers' Meeting Plus in Bangkok, Thailand, in November.