Cho's wife, a university professor surnamed Chung, is suspected of inappropriately helping the couple's daughter gain admission to medical school, as well as being involved in a dubious private equity fund investment.

Chung showed up for the questioning at the Seoul Central District Prosecutors Office in southern Seoul at around 9 a.m.

In contrast to speculation that her arrival would be made public, prosecutors decided not to disclose her arrival due to her health condition.

Chung left the prosecutors office following eight hours of questioning. Prosecutors said she requested to leave, citing her health condition, and said they plan to call her in for further questioning without elaborating on a date. 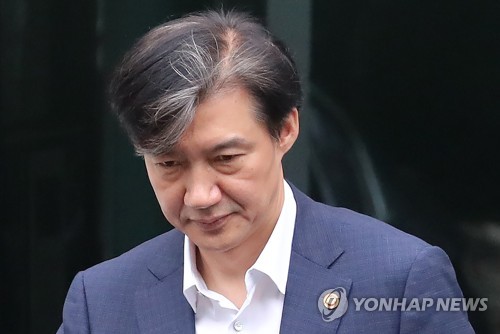 Later in the day, prosecutors indicted Cho's relative, also surnamed Cho, who is at the center of suspicions over the private equity fund investment.

Prosecutors said they indicted the 36-year-old on charges including embezzlement and violation of capital market law. He is also alleged of destroying or hiding evidence related to the ongoing probe.

Cho is considered the actual owner of Co-Link Private Equity, the operator of a fund in which Cho's wife and two children, as well as his brother-in-law and his two children, have invested a combined 1.4 billion won (US$1.2 million).

Cho has been detained since Sept. 14 when he was arrested at Incheon International Airport following a month-long sojourn. He will remain in detention under the indictment.

Thursday's developments come a month after the prosecution began looking into allegations surrounding Cho's wife and the couple's two children. 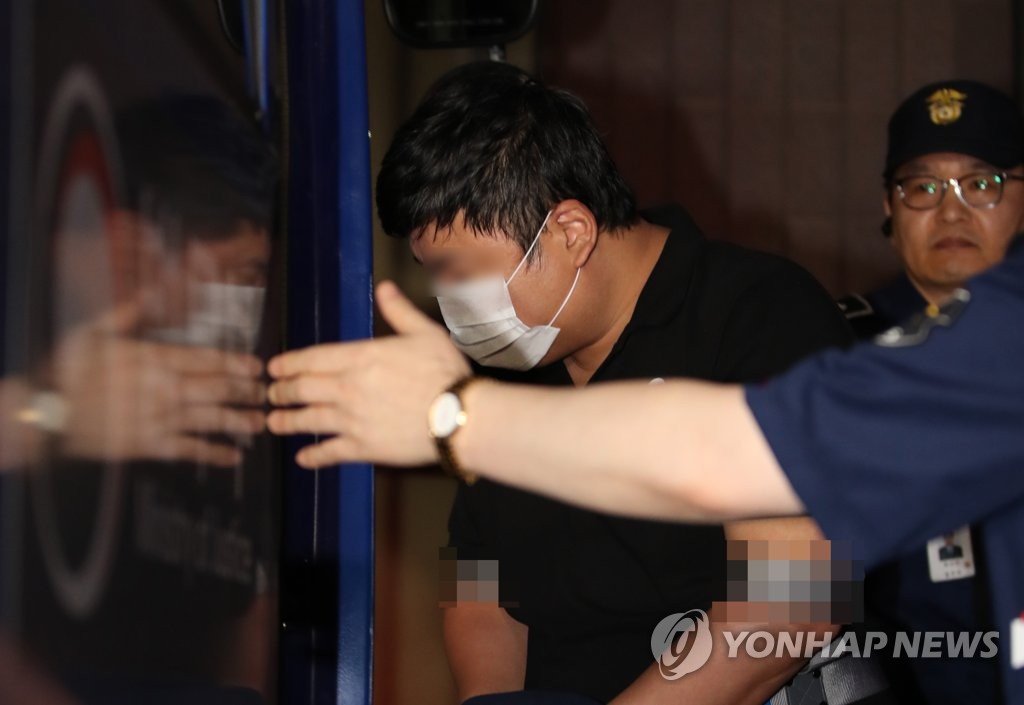 On Sept. 6, Chung was indicted without undergoing questioning on charges of fabricating a college president's citation to be used for her daughter's medical school application.

Chung is also suspected to have been directly involved in the investment and management of Co-Link Private Equity. Of the 1.4-billion won investment, Chung and her two children put in a total of 1.05 billion won in July 2017, right after Cho became the senior presidential aide for civil affairs to President Moon Jae-in.

The sales of a local lamppost switch manufacturer soared thanks to massive orders from government offices after the fund invested a large sum of money into the company, raising suspicions over Cho's possible influence.

Cho denied his role in the investment during his confirmation hearing.

Prosecutors also believe Chung was involved directly or indirectly in the management of another company that received investments from the fund.

As the probe intensified, allegations that she tried to destroy evidence by replacing or hiding the hard disks of computers in her home and office also emerged.

Whether the prosecution will seek an arrest warrant for the wife and whether the court will issue one is expected to become a watershed moment in the ongoing probe.

Sources familiar with the probe see a high likelihood that the court will issue an arrest warrant for her due to her alleged involvement in almost all suspicions surrounding the family and circumstantial evidence that she attempted to destroy evidence in the computers.

But some others say the prosecution should be careful because the court may turn down a request for the arrest warrant for the wife of an incumbent justice minister who oversees the prosecution. In that case, the prosecution could face strong criticism from the ruling bloc.

Cho's family has denied the allegations surrounding them. Chung has written several Facebook posts since last month, claiming that her rights have been infringed on due to false media reports.

Earlier in the day, Cho's daughter also rebutted allegations over her education in her first-ever press interview.

The 28-year-old is alleged of receiving an internship certificate that misstates the number of her days she actually worked. Critics have also raised questions on how she was the primary author of a published pathology paper while taking part in a two-week internship as a high school student.

"I haven't forged documents or received false (internship) certificates with help from my parents," she said.
(END)