SEOUL, Oct. 3 (Yonhap) -- North Korea failed to give prior notice to the international maritime body ahead of testing a mid-range submarine-launched ballistic missile (SLBM) this week, the Voice of America (VOA) reported Thursday.

On Wednesday, North Korea fired what it claimed as the "new-type SLBM Pukguksong-3" SLBM in waters off its eastern coast town of Wonsan, according to the North's Korean Central News Agency (KCNA). The missile flew around 450 kilometers at a maximum altitude of about 910 km, according to Seoul's Joint Chiefs of Staff.

In an email, the International Maritime Organization (IMO) said it has not received any prior notice from the North in relation to the latest missile test, according to the VOA.

North Korea joined the organization in 1986 and is obliged to make such a notice to the agency for the sake of the safety of civilian vessels.

Announcing the latest launch, the KCNA said the test-firing "had no adverse impact on the security of neighboring countries."

Immediately after the test-firing, Japan said the missile fell into the country's exclusive economic zone.

Meanwhile, major European countries issued a statement condemning North Korea for the violation of U.N. Security Council resolutions by firing the ballistic missile and called for concentrating on resuming the denuclearization talks with the United States.

Under the resolutions, the North is banned from test-firing all kinds of ballistic missiles.

The latest launch, the 11th so far this year, came just a day after North Korea said that Pyongyang and Washington agreed to resume working-level nuclear talks on Oct. 5. 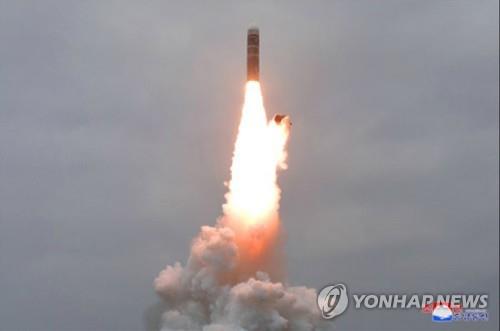