SEOUL, Oct. 4 (Yonhap) -- About 800 cases of workplace harassment have been reported to the labor ministry since a new law aimed at preventing harassment in the workplace took effect in July, government data showed Friday.

The data, submitted by the ministry to the Environment and Labor Committee at the National Assembly, revealed that a total of 794 cases of various forms of harassment at work by superiors were reported through Sept. 19 from July 16, when the revised law on labor standards, commonly called the workplace anti-bullying law, went into effect after a six-month grace period.

Abusive words topped the list of all cases with 353 cases, followed by unfair treatment in personnel affairs with 209 cases and bullying and backbiting with 93 cases.

By industry, 158 cases concerned workplace harassment in manufacturing, 119 cases in business facility management and 96 cases in health and welfare services. 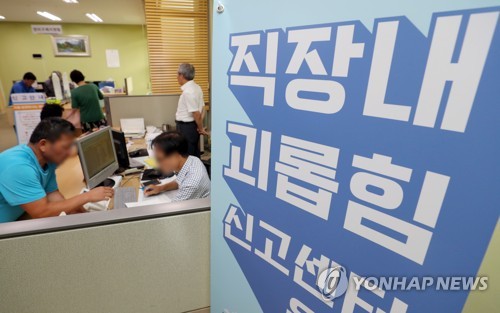 If retaliatory or discriminatory measures are taken against victims or those who report abusive conduct, employers could face a maximum three-year jail term and a fine of up to 30 million won (US$25,423).

But critics say the law lacks effective controls on workplace harassment as it does not stipulate the punishment for a perpetrator. The labor ministry is focusing its efforts on issuing administrative guidance to each workplace so that it will be prepared to prevent or deal with all forms of harassment at work.