SEOUL, Oct. 4 (Yonhap) -- South Korean activists on Friday demanded Hong Kong police apologize for the recent shooting of a teenager and stop suppressing protesters, voicing support for the democracy protests amid an escalating stand-off between authorities and protesters.

Earlier this week, Hong Kong high school student Tsang Chi-kin was severely injured after a police bullet narrowly missed his heart. Hong Kong police acknowledged that an official fired the weapon but defended him, saying he did so in fear of his life.

The shooting, the first time a demonstrator had been hit by live fire, has heightened tensions in the city. News reports that the government is considering imposing a ban on wearing face masks at protests further fueled anger.

Around 65 civic organizations and Hong Kong residents living in South Korea held the press conference, denouncing police brutality and demanding a formal apology. They also called for the five demands to be accepted, including full withdrawal of the extradition bill and retracting from labeling the protesters as "rioters." 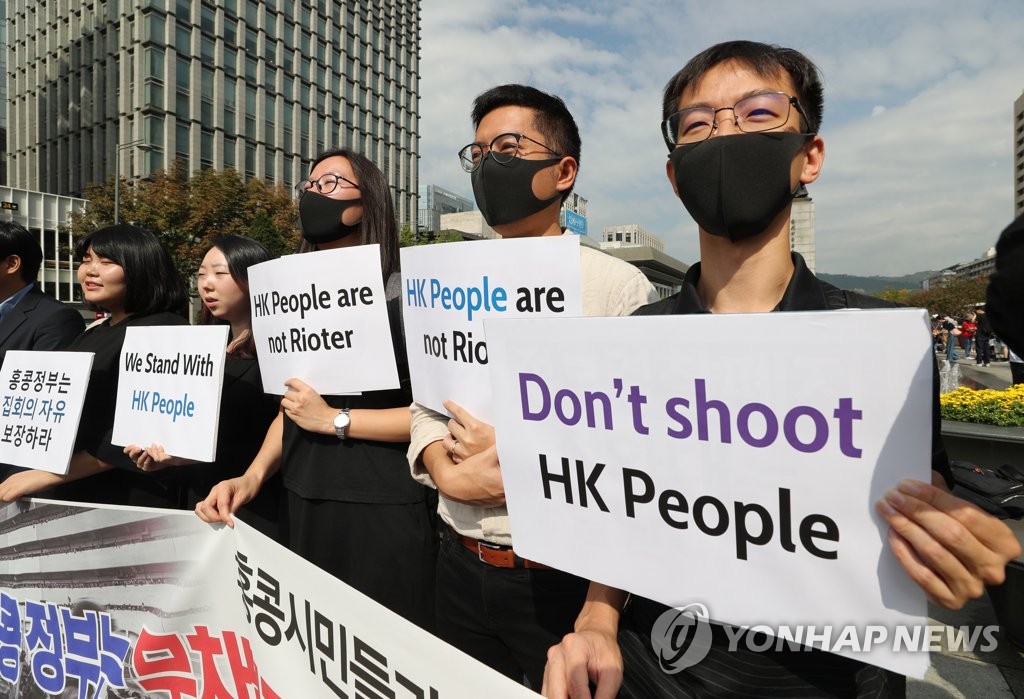 Dressed in black and wearing black face masks, participants kicked off the press conference by singing "March for the Beloved," a Korean song that has become an anthem for the democracy movement here. The event took place at Seoul's Gwanghwamun square, the symbolic venue where candlelight vigils demanding former President Park Geun-hye's impeachment took place.

"Hong Kong people's passion for freedom and democracy shows no sign of abating. It's a reaffirmation of their determination seen in the 2014 umbrella protests. We, who have gone through a long process for democracy, voice support and solidarity for them," a YMCA official said.

Also among the participants were Hong Kong residents working or studying in Seoul.

"I denounce the police brutality. The level of their violence is almost that of murder. ... (However) we will gain democracy. We have the people's protest," said Chung Hiu-fan, a member of the Korea Student Christian Federation.

Martin Ho, who works at a Seoul-based NGO, said he will stand with the people of Hong Kong as long as the demonstrations continue.

"We hope we won't have to take further action (like the press conference). But until the demands are met, we will continue to support protesters in Hong Kong," Ho said.

Organizers, who wrapped up the event by chanting slogans "Liberate Hong Kong" and "Revolution of our times" in both Korean and Cantonese, said they plan to send copies of their statement to the people of Hong Kong, as well as the Chinese Embassy here.

The pro-democracy protests have been going on since mid-June. People took to the streets demanding Hong Kong Chief Executive Carrie Lam withdraw a controversial bill that would have allowed criminal suspects to be extradited to mainland China, which critics argue may undermine Hong Kong's democracy.