STOCKHOLM/SEOUL, Oct. 6 (Yonhap) -- North Korea's top nuclear negotiator said Saturday that the much-anticipated working-level talks with the United States broke down, accusing Washington of having come to the talks "empty-handed."

Kim Myong-gil made the remark in front of the North Korean Embassy on the outskirts of Stockholm after holding talks with his U.S. counterpart, Stephen Biegun.

The meeting marked the first formal negotiation between the two sides since February's summit between U.S. President Donald Trump and North Korean leader Kim Jong-un in Hanoi collapsed due to gaps over the extent of Pyongyang's denuclearization and Washington's sanctions relief.

"The negotiation did not live up to our expectations and broke down. I am very displeased," Kim said. "It is entirely because the U.S. has not discarded its old stance and attitude that the negotiation this time failed to produce any results."

Kim also said that he told the U.S. that the North can enter discussions on the "next phase" of its denuclearization measures if the U.S. replies "sincerely" to the North's earlier measures such as its self-imposed moratorium on nuclear tests and intercontinental ballistic missile launches.

"While having so far hinted at a flexible approach, new method and creative solution, the U.S. has heightened expectations. But it came out with nothing, greatly disappointed us and sapped our appetite for negotiations," he said.

"We have already clearly explained to the U.S. what calculation method was needed and given it sufficient time, but the U.S. came to the negotiations empty-handed and this, after all, shows it is not willing to solve the issue," he added.

In the lead-up to Saturday's talks, uncertainty abounded as the two sides remain far apart over the scope of Pyongyang's disarmament, its denuclearization method and what rewards it will receive in return. 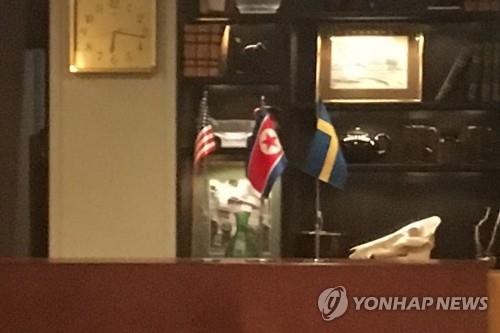