SEOUL, Oct. 7 (Yonhap) -- Defense Minister Jeong Kyeong-doo was set to leave for Oman on Monday for talks with his counterpart about ways to boost cooperation in defense and arms industry fields, his office said.

During his two-day visit, Jeong plans to meet with his Omani counterpart, Sayyid Badr bin Saud, and sign a memorandum of understanding on defense cooperation between the two countries, according to the Seoul ministry.

The minister is also scheduled to visit the Cheonghae Unit, a 300-strong South Korean contingent stationed in the Gulf of Aden off the Middle Eastern country's city of Muscat, to meet the troops.

The Cheonghae Unit has been deployed there since early 2009 as part of global efforts to tackle piracy in the region.

There has been speculation that the unit might also undertake missions in the Strait of Hormuz, where the U.S. has called on its allies to forge a coalition against Iran's military activities amid heightened tensions between Washington and Teheran.

"The visit is expected to further strengthen bilateral cooperation in the defense field and related industries," the ministry said in a release.

Jeong is scheduled to return home on Wednesday, it added. 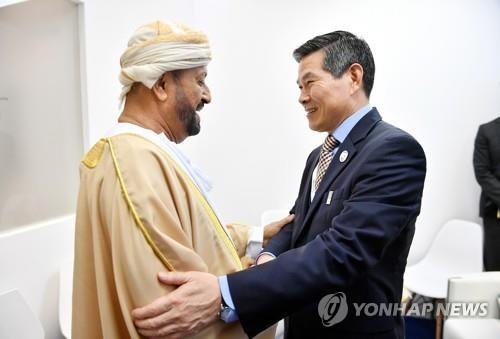 Defense chief to visit Oman for ministerial talks this week

Defense chief to visit Oman for ministerial talks this week