SEOUL, Oct. 7 (Yonhap) -- Arnold Schwarzenegger and Linda Hamilton, the leading actors of "Terminator: Dark Fate," will visit South Korea this month to promote the new American science-fiction action film ahead of its imminent release in the country, its local distributor said Monday.

According to Walt Disney Company Korea, the two actors will attend an Asian press junket in Seoul on Oct. 21-22, which will attract reporters from 11 Asian countries, including Japan, Taiwan, India and Singapore. South Korea has been chosen to be the first place for the new U.S. film's Asian press junket.

During their Seoul visit, part of their new movie's Asian promotional tour, Schwarzenegger and Hamilton will also meet with local fans and media, in addition to holding premieres and interviews with the Asian reporters.

Schwarzenegger, who plays the iconic character T-800 in the new film in the "Terminator" series, will visit South Korea for the second time since 2015. 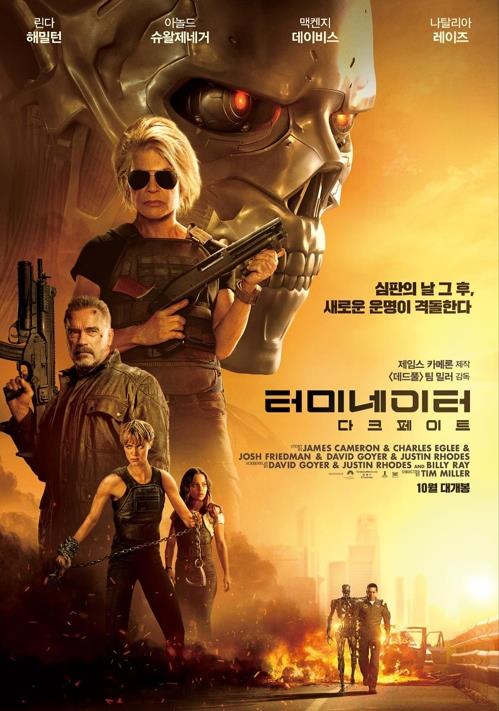 Hamilton, who plays the fictional character Sarah Connor in the "Terminator" series; Tim Miller, director of "Terminator: Dark Fate"; and three other stars of the new film -- Mackenzie Davis, Natalia Reyes and Gabriel Luna -- will also come to Seoul for the Asian press junket, the agency said.

"Terminator: Dark Fate," a direct sequel to "Terminator 2: Judgment Day," features a fight between Grace, a super-soldier from the future, and the ultimate enemy, the Terminator Rev-9 armed with cutting-edge technology. It will be released in local theaters on Oct. 30.

Actors of new 'Terminator' film to visit Seoul this month

Actors of new 'Terminator' film to visit Seoul this month