WASHINGTON, Oct. 6 (Yonhap) -- Thanks to his team's offensive explosion, Los Angeles Dodgers' South Korean left-hander Ryu Hyun-jin was in line for a ho-hum postseason victory after tossing five up-and-down innings against the Washington Nationals on the road on Sunday.

Ryu was lifted for pinch hitter Chris Taylor in the top sixth of Game 3 of the National League Division Series (NLDS) at Nationals Park in Washington, moments after Russell Martin delivered a two-out, two-run double to put the Dodgers ahead 3-2.

Kike Hernandez drove in two more runs with a double of his own for a 5-2 Dodger advantage, and Justin Turner's three-run homer later in the inning put the Dodgers up 8-2, seemingly comfortable enough for even a shaky Dodgers bullpen.

Ryu looked to be in line for a loss after completing his five innings with the Dodgers down 2-1. Both of the Nationals' runs off Ryu came courtesy of a two-run homer by Juan Soto in the bottom of the first. 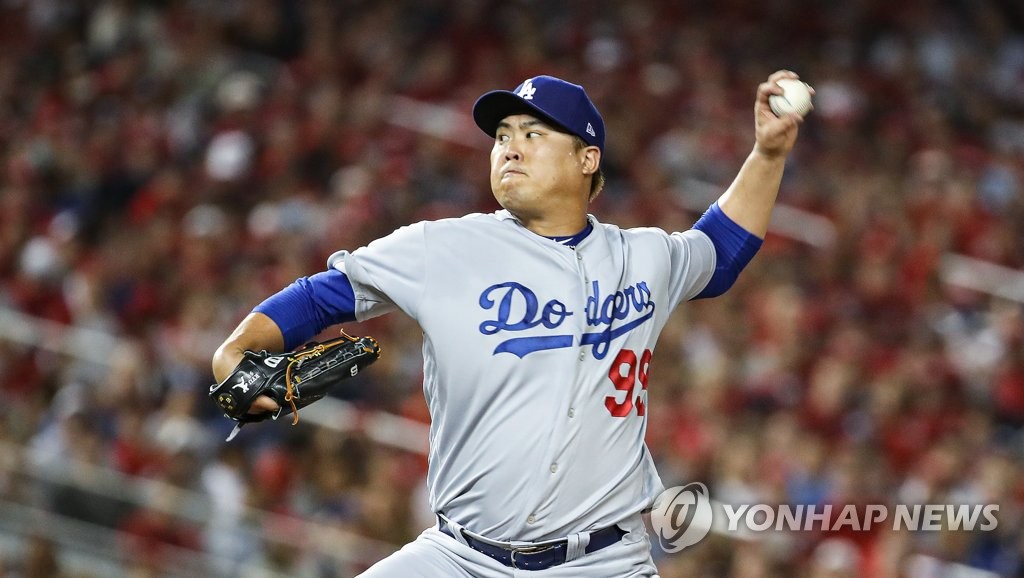 For the game, Ryu allowed two runs on four hits and two walks. He struck out three, while throwing 48 of his 74 pitches for strikes.

Ryu went 14-5 with a major league-best 2.32 ERA in the regular season. In his two regular season meetings with the Nationals, Ryu had given up just one earned run in 14 2/3 innings.

He had been 2-2 with a 4.11 ERA in his seven previous postseason starts prior to Sunday.

Including starting pitcher Anibal Sanchez batting ninth, the Nationals put seven right-handed batters in the starting lineup against Ryu, and the game began inauspiciously enough for the left-hander.

With one out in the first, Ryu walked No. 2 hitter Adam Eaton, one of the two left-handed hitters in the lineup, for his first free pass issued since Sept. 4. Ryu retired MVP candidate Anthony Rendon on a fly ball to center field, but he couldn't get past left-handed hitting Soto, who hammered a high, 91-mph fastball and drove it over center for a 2-0 lead.

Ryu regrouped for a clean second inning, which included two strikeouts. Ryu needed just 10 pitches to retire the side in order in the third inning. Ryu sat down seven batters in a row after Soto's home run.

That string ended in the fourth as Ryu gave up consecutive singles to Rendon and Soto. But he got Howie Kendrick to fly out to left and induced a 5-4-3 inning-ending double play ball off Kurt Suzuki's bat.

And Muncy helped Ryu at the plate in the top fifth, with a solo home run that cut the deficit to 2-1. 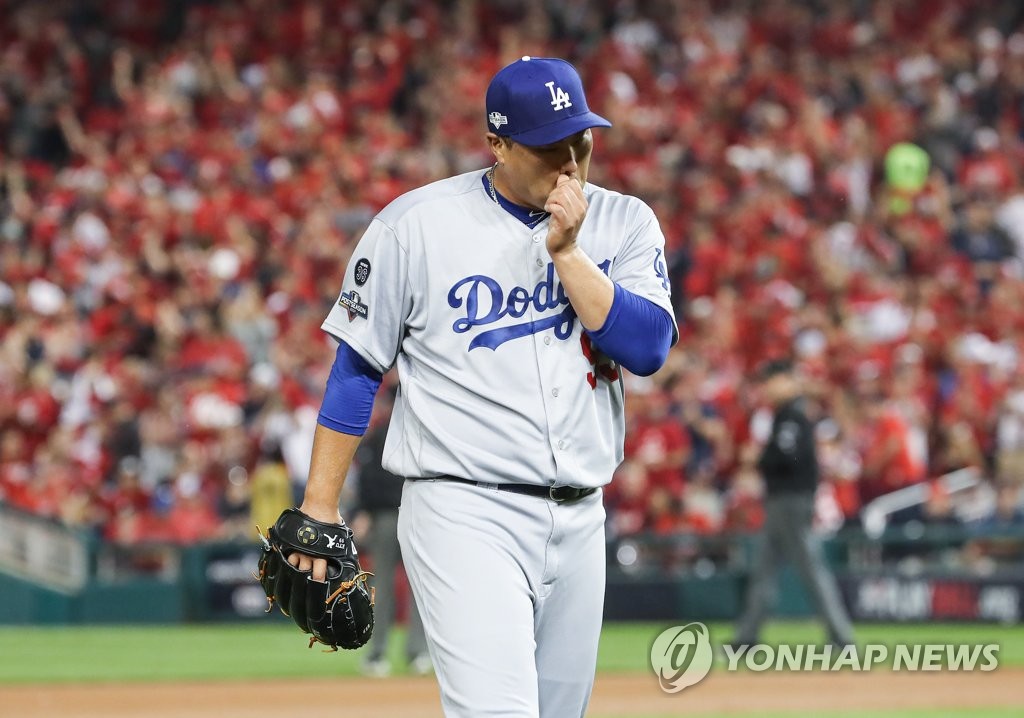 Ryu pitched out of another jam in the fifth. Michael A. Taylor hit a one-out single and reached second base on a groundout. Ryu then intentionally walked Trea Turner to set up a lefty-lefty match against Eaton and got him to fly out to left field.

The Dodgers had the bases loaded with two outs in the top of the first inning thanks to two walks sandwiching a single but failed to give Ryu some early run support as A.J. Pollock struck out swinging against Sanchez.

And after creating some traffic in that first inning, the Dodgers couldn't touch Sanchez, who struck out the side in the second, pitched around a two-out double by Justin Turner in the third and escaped the fourth unscathed after Gavin Lux's two-out single. The right-hander had nine strikeouts in his five innings pitched.

And just when it seemed Ryu would be saddled with the loss, the Dodgers' bats came alive against Patrick Corbin, who started Game 1 of this series but came out of the bullpen on Sunday in Sanchez's relief.

First, it was Ryu's catcher, Martin, coming through with a two-out double. It was merely the beginning of a massive inning, as Hernandez picked up a pinch-hit double off Corbin, and Turner, facing new pitcher Wander Suero, launched a three-run bomb to left field for an 8-2 lead.