SEOUL, Oct. 7 (Yonhap) -- South Korean political parties are under fire for spurring a divide among liberals and conservatives by politicizing citizens' rallies over corruption allegations involving the justice minister's family.

In recent weeks, South Koreans took to the streets in Seoul to hold separate demonstrations to voice either their support for or opposition to Justice Minister Cho Kuk, whose family is under a prosecution probe into the allegations.

For Koreans, public plazas have served as venues to show their collective thoughts and express aspirations for changes over major political and social issues.

Tens of thousands of South Koreans held a candlelight vigil in late 2016 at the Gwanghwamun square in central Seoul, calling for the ouster of former President Park Geun-hye over a corruption scandal. The Constitutional Court's ruling removed her from office in March 2017.

The controversy surrounding Cho has effectively divided Koreans into two groups -- those who support him and those who don't -- and prompted them to hold respective rallies in two different public places to voice their opinions. 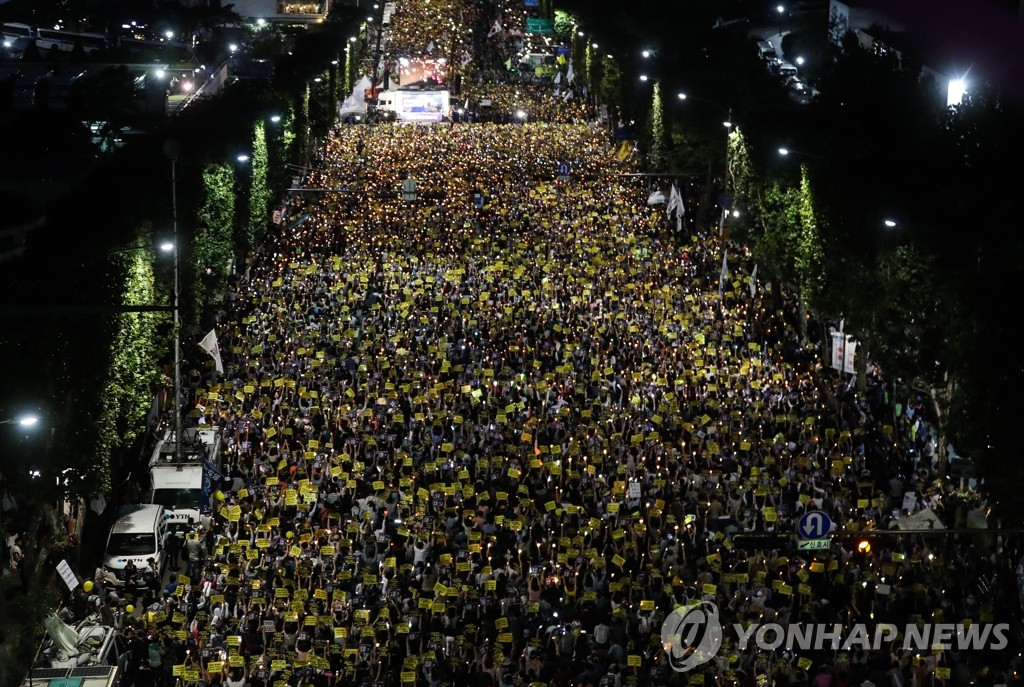 Critics have said political parties are shunning efforts to seek dialogue and compromise to ease tensions and have instead used divided public sentiment to muster supporters ahead of the general elections in April 2020.

"Citizens took to the streets out of their distrust of politics and the judicial system," said Ko Jin-dong, a political analyst.

"It is needless to say that the role of party politics should be revived," he added.

Cho, a law professor and former presidential senior secretary for civil affairs, has been at the center of the political storm since he was named as the justice minister in early August.

Cho is viewed as a key architect of President Moon Jae-in's vision to reform the prosecution, including a proposal to set up an independent unit to probe corruption allegations by ranking public officials.

But corruption allegations involving his family have emerged, sparking public uproar. The allegations include his wife's forgery of a college presidential citation for her daughter and his family's dubious investment in a private equity fund.

Despite the prosecution's investigation and strong objections from opposition parties, Moon appointed him as the minister on Sept. 9.

For more than two months, political parties have wrangled over the appointment of Cho.

The ruling Democratic Party (DP) has criticized the prosecution's investigation as a politically motivated probe aimed at deterring the reform.

The main opposition Liberty Korea Party (LKP) has called for removing Cho from office and threatened to push for a parliamentary impeachment.

Supporters of Cho have held candlelight demonstrations in recent weeks, demanding reform of the prosecution and calling on the agency to stop what they call an excessive probe into Cho's family.

Since Sept. 21, they have held three rounds of weekend rallies near the Seocho subway station in southern Seoul, where the prosecution's main office is located.

Conservatives and critics of liberal President Moon, meanwhile, held a massive rally at the Gwanghwamun square on Thursday, calling for the president to dismiss Cho. They held a similar demonstration on Saturday hundreds of meters from where liberals staged their rally in Seocho.

Even amid concerns about a deepening divide, rival parties clashed over how many supporters gathered for the rallies.

The DP claimed the number of participants during the Sept. 28 rally reached 2 million. Seoul has a population of around 10 million.

As for the Oct. 3 rally around Gwanghwamun, the LKP insisted 3 million protesters took part. 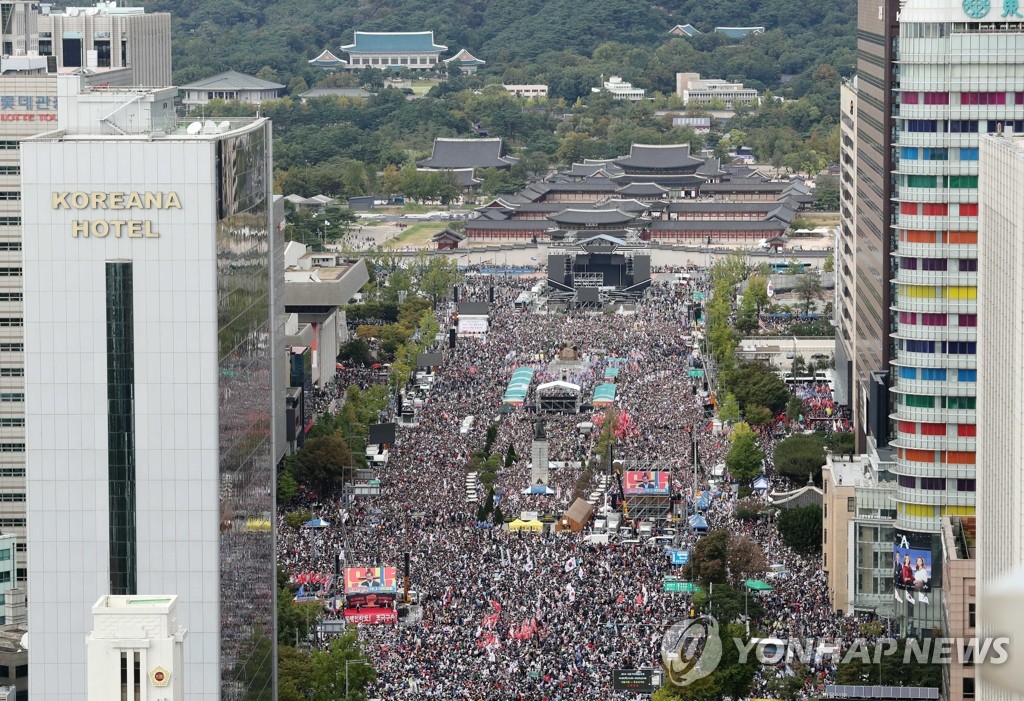 "Political leaders fell into counting the number of protesters and do not seem to care about the country dividing into two," Moon said at a meeting with his senior aides on Friday.

He expressed grave concerns that the National Assembly is instigating confrontations and tensions, not serving as a "furnace" that could melt them.

"I sincerely ask rival parties to remain calm and put their heads together to promote people's livelihoods and integration," he said.

The National Assembly has already come under public criticism for its poor legislative performance so far this year. Hundreds of bills linked to people's livelihoods have been pending for a long time.

The assembly was also marred by scuffles and wrangling in late April when the ruling party and smaller parties put key reform bills on the fast-track despite the LKP's objections.

Experts raised concerns the current confrontations may be prolonged as rival parties will likely want to politicize the Cho Kuk controversy in the run-up to next year's elections.

Ko, a political analyst, said parliament needs to accommodate people's demands as expressed through the rallies in a way that can develop the country's democracy.

"It is worrisome that other important issues such as Japan's export curbs against South Korea and an economic slowdown are overshadowed by the latest controversy," he said, calling for cool-headed actions by rival parties. 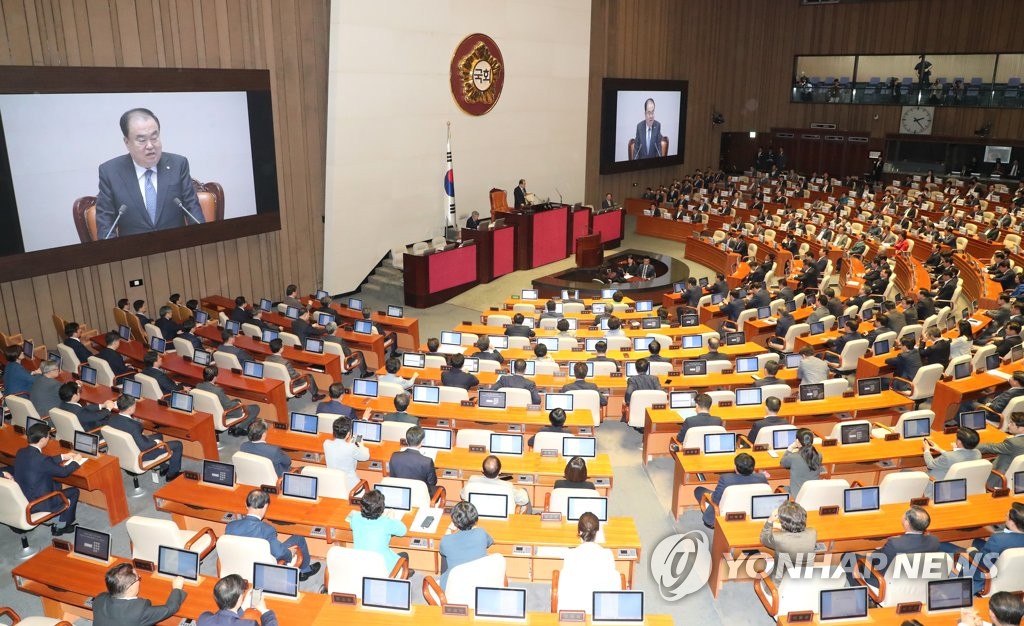