SEOUL, Oct. 7 (Yonhap) -- About 1,300 figures in the nation's literary circles issued a statement Monday expressing their support for embattled Justice Minister Cho Kuk and calling for reforming the prosecution.

The statement signed by 1,276 writers and poets, including novelist Hwang Sok-yong and poet Ahn Do-hyun, was released in a news conference at the National Assembly.

The statement said the writers and poets are very confused as the prosecution has produced "unconfirmed suspicions" about allegations of wrongdoing involving Cho and his family. 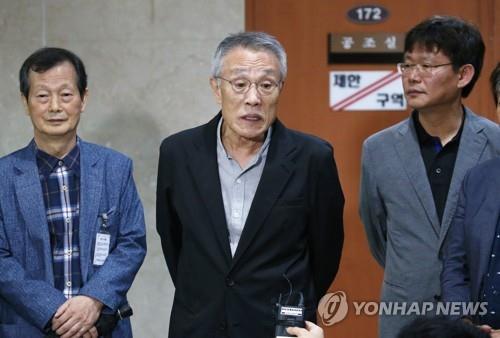 "At present, the sword wielded by the uncontrollable prosecution is scarier than that of military dictators of the past," it said. The statement also attacked local media for "sickening" the nation under the pretext of uncovering the truth about Cho.

Hwang read the statement in the news conference and said he attended an outdoor rally held in southern Seoul on Saturday to express support for Cho.

Ahn also said he and other figures in the culture and art circles will consider taking their next acts of solidarity after watching the progress of prosecution reform.

About 1,300 writers, poets issue statement in support of Cho Kuk

About 1,300 writers, poets issue statement in support of Cho Kuk