SEOUL, Oct. 7 (Yonhap) -- The Korea-Latin America and the Caribbean Business Summit is being held in Seoul on Oct. 7. The following is the full text of Inter-American Development Bank (IDB) President Luis Alberto Moreno's contribution that highlights the importance of ever-growing partnership between South Korea and Latin America, the Caribbean.

Six decades after South Korea embarked on the "man-made miracle" that turned it into an economic powerhouse, the country is a leading example for developing nations everywhere.

From Mexico to Argentina, countries in my part of the world—Latin America and the Caribbean—look to South Korea for inspiration on how to boost economic growth, create jobs and start innovative companies.

Today, South Korean companies are changing the way we live, travel and communicate. But it wasn't that long ago that this extraordinary country's per capita GDP was lower than that of the poorest nations in the Americas.

That alone attracts the attention and admiration of business leaders and government officials in my region. And while many Latin American and Caribbean countries are wealthy in natural resources, South Korea turned a lack of them into an advantage by investing in education and setting long-term development plans that allowed it to become productive and self-sufficient.

And yet there is also a lot that this beautiful nation can learn from my part of the world. That is why I am so proud that South Korea is such an active member of the Inter-American Development Bank, which it joined in 2005 to strengthen ties with Latin American and the Caribbean.

This week the IDB and the Government of South Korea jointly hosted the fifth Korea-LAC Trade and Investment Forum in Seoul. Since the first edition in 2007, this event has grown to become the premier gathering of businesses interested in this growing commercial relationship.

Trade and investment have also reached record levels, and free trade agreements have leveled the playing field for businesses to thrive. South Korea has signed FTAs with eight countries in Latin America and the Caribbean, more than any other Asian nation.

South Korea has also begun talks to develop a free trade agreement with the countries of Mercosur, whose combined GDP of US$3.4 trillion represents more than 75 percent of the economic output of South America. Moreover, South Korea is on track to become an associate member of the Pacific Alliance, which would strengthen its existing FTAs with Chile, Peru and Colombia.

Foreign direct investment from South Korea into Latin America and the Caribbean over the past decade has been key to this increasingly vital relationship. Although investment is down a bit from its US$2.4 billion peak in 2015, many of my friends back home use smartphones, TVs and drive South Korean cars, including those built in plants located in our region.

Investment from Latin America and the Caribbean into South Korea is much smaller, but we are seeing success stories involving firms that have overcome entry barriers and are now thriving in South Korea.

The next time you stop into an Angel-in-us coffee shop here in South Korea, you may be enjoying beans supplied by Amativo, a company from my home country, Colombia. And if you sit down for some famous Korean barbecue in Seoul, your meat might be sourced from Agrosuper, a Chilean company doing business in Korea since 2002. 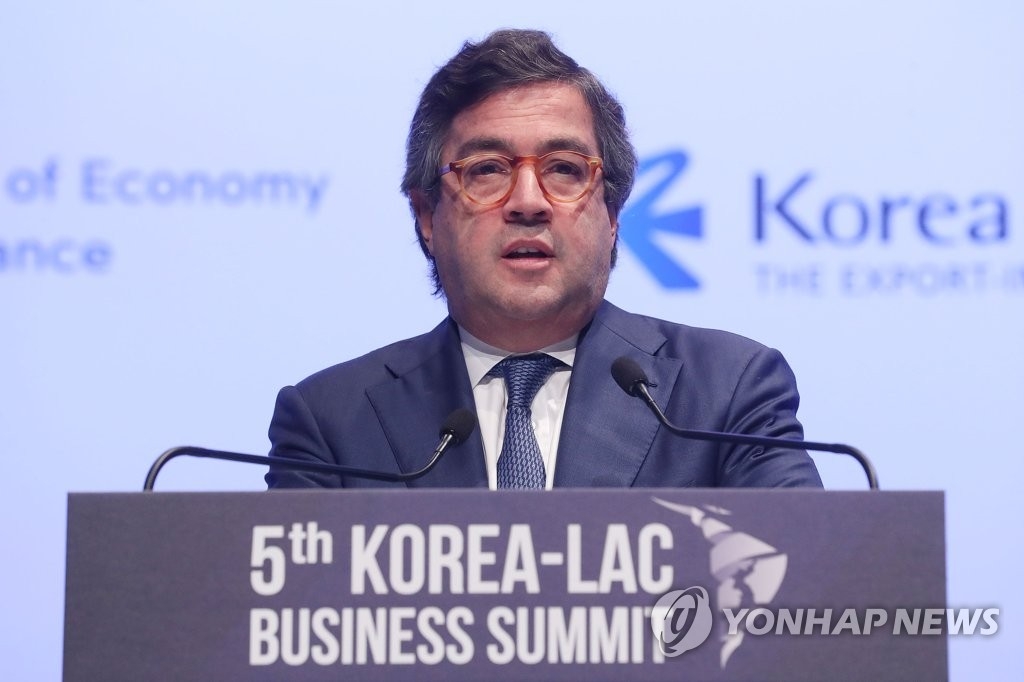 But while opportunities abound to strengthen the strategic economic partnership between Korea and Latin America and the Caribbean, there is also a lot we can do to foster growth.

For starters, there are many untapped synergies between South Korean companies and startups in Latin America. The latter could benefit from Korean business acumen and venture capital.

To prosper even more, we should also encourage the economic relationship between South Korea and Latin America and the Caribbean to move beyond the traditional commodities-for-manufactured goods pattern. Diversity in trade will be key to ensuring sustainable bilateral growth.

Currently, just four countries—Brazil, Chile, Mexico and Peru—account for almost for almost 90 percent of our region's total exports to Korea. And trade in the other direction is also heavily concentrated, with 70 percent of Korean exports going to Mexico, Brazil and Chile.

Meanwhile, trade is hamstrung back by high costs, arising both from tariffs, non-tariff barriers, and transport costs. As a result, the logistical and bureaucratic costs of trade can nearly double the value of goods and services that we buy from each other. In some countries, such as Jamaica, Bolivia, and Suriname, these costs are so high that they nearly prohibit trade.

Reducing tariffs is one clear way to reduce costs. Agricultural exports from Latin America and the Caribbean face Korean tariffs that average almost 88%. Logistical inefficiencies in our region, including in infrastructure and customs procedures, also raise costs. The IDB has worked with countries in our region to lower these costs by investing in port facilities and helping agencies reduce red tape, but more can be done.

If we cut these costs, economists at the IDB estimate that Latin American and Caribbean exports to South Korea could rise by 43 percent, while Korean exports to our region would jump 63 percent. That would add US$10.3 billion and US$25.2 billion, respectively, to bilateral trade.

South Korea's contributions to Latin America and the Caribbean go far beyond trade. During the country's nearly 15 years in the IDB, South Korean trust funds have contributed more than US$600 million to projects that have demonstrably improved lives.

These projects include improving broadband infrastructure in Nicaragua, helping Barbados modernize its energy system, and strengthening elementary education in Paraguay. Korean financing has also helped raise vehicle safety in our region and improved sustainability in some of our biggest cities.

In its words and its deeds, South Korea has shown that investment in development will benefit all of us, from Seoul to Sao Paolo. I'm confident our bilateral ties will continue to thrive and look forward to seeing them grow over the next six decades.
(END)