SEOUL, Oct. 7 (Yonhap) -- South Korea plans to launch the second phase of a project to introduce next-generation fighter jets for the Air Force starting in 2021 with a budget of around 4 trillion won (US$3.34 billion), the arms procurement agency said Monday.

Codenamed the F-X, or Fighter eXperimental, South Korea has been pushing to replace its aging fleet of F-4 and F-5 fighter jets since 2012. Under the first phase of the project worth around 7.74 trillion won, the country has decided to buy 40 F-35A stealth fighters by 2021.

"The government is currently preparing for the second phase of the project, to be launched in 2021 for the five years to come, by allotting 3.99 trillion won," the Defense Acquisition Program Administration (DAPA) said in a report presented to the National Assembly for a parliamentary audit.

The defense ministry is reviewing military requirements, and based upon the results, the agency will draw up a master plan for the project and conduct a feasibility study, it added.

Some have speculated that the government is mulling the purchase of 20 more F-35As, but the agency and the military authorities have said that nothing has been decided.

As for the F-35A radar-evading fighters, South Korea has so far brought in eight units, having begun in late March, and five more are to arrive here by the end of this year, according to the DAPA.

The agency also said that it will start a process to develop a system for a 3,000-ton Chang Bo Go-III submarine in earnest next month. The 10-trillion won project, which began in 2017, calls for making the 3,000-ton indigenous submarine by 2031.

Major arms procurement projects pushed by the DAPA also include the construction of a light aircraft carrier by 2033. For its concept design and the development of key technologies, a total of 27.1 billion won was earmarked for next year, according to the agency. 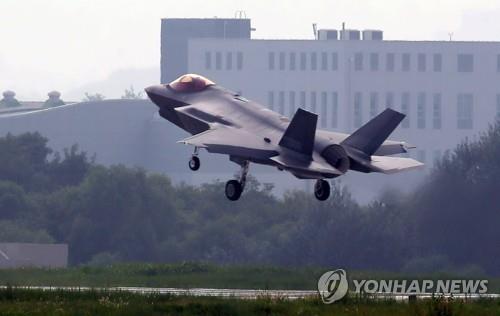