Third-string catcher Joo Hyo-sang played the hero for the Heroes, with a walk-off ground ball in the bottom of the 10th inning to complete a comeback from a 3-0 and then a 4-1 deficit. 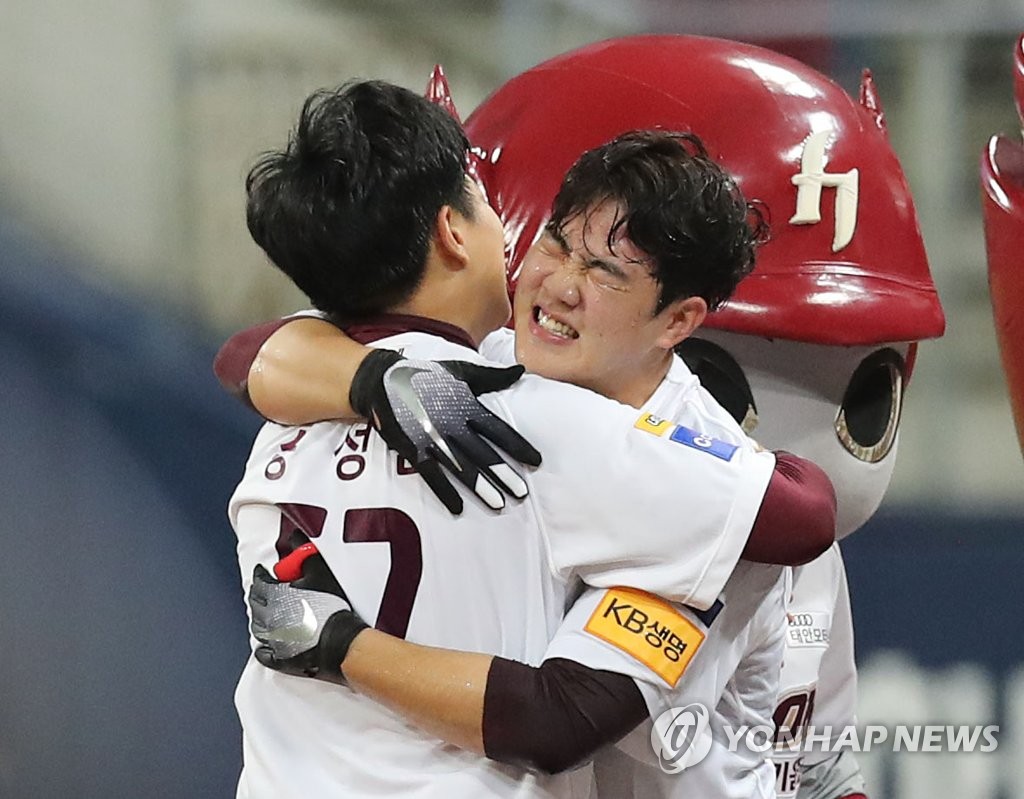 With the Heroes down 4-1 heading into the eighth, cleanup Park Byung-ho belted a two-run home run to cut the deficit to 4-3. Then, in the ninth, Seo Geon-chang tied the game at 4-4 with a sharp single off LG closer Go Woo-suk.

After the Twins went down in order in the top 10th, the Heroes finished the game in the home half of that inning.

Kim Ha-seong led off with a single and moved to second on a sacrifice fly.

Then LG left-hander Jin Hae-soo made a critical error, throwing to second base to check Kim when no one was covering the bag. The errant throw trickled into center field, Kim easily advanced to third, and came home to score the winning run on Joo's grounder to second.

After their starter, Eric Jokisch, failed to get out of the third inning, the Heroes sent out eight relievers during the win.

The Twins, who hadn't scored in the past 13 postseason innings before Monday, got a run across in each of the first three innings.

They got on the board in the top of the first thanks to three straight hits off Jokisch. 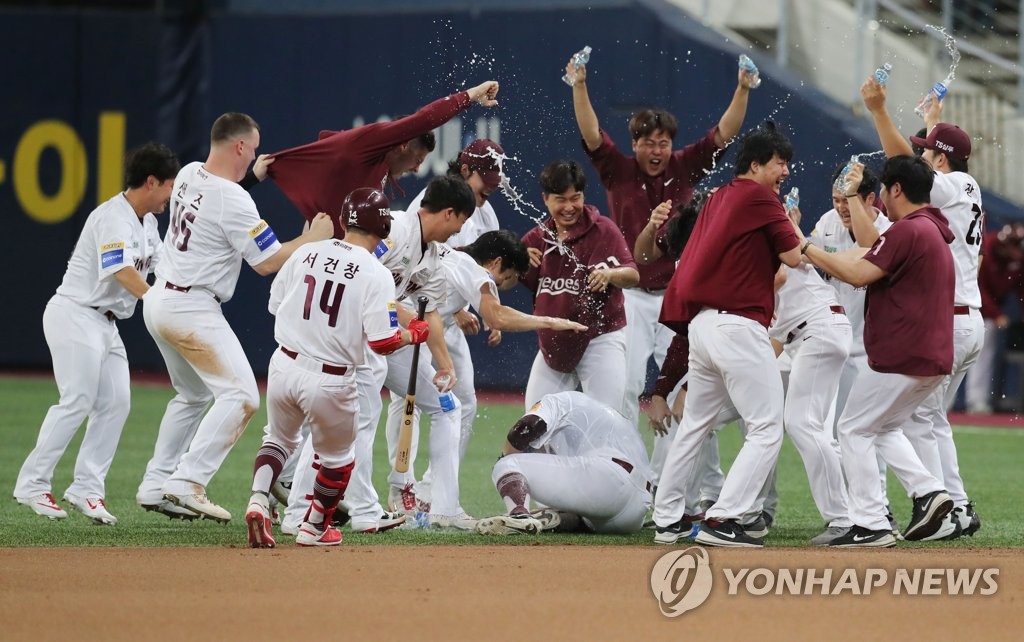 The Twins could have blown things wide open, if not for a key defensive play by the Heroes.

Chae Eun-seong sent a screaming line drive to the right side and first baseman Park Byung-ho made a fine jumping grab and threw to second base as he landed, doubling off Lee Hyung-jong at second to end the inning.

The Twins added a second run in the second inning. After getting two outs, Jokisch hit a batter, gave up a single, and issued a walk to load the bases.

Jokisch then walked Kim Min-sung to let in a run for a 2-0 Twins lead. But the left-hander prevented further damage by getting Lee Hyung-jong to pop out to second.

The Twins went right back at it in the third, stringing together three hits to go up by 3-0. Yoo Kang-nam's RBI double, which followed two straight one-out singles, knocked Jokisch out of the game.

The Twins wasted a golden opportunity to extend their lead in the sixth. With one out, they loaded the bases with a pair of singles and a walk. But their No. 3 and No. 4 hitters, Lee Hyung-jong and Kim Hyun-soo, both flied out after swinging on first pitches from reliever Kim Dong-jun.

But Cha held his ground. With tying runs at second and third, the left-hander struck out Park Byung-ho for the third time in the game with a nasty curve. 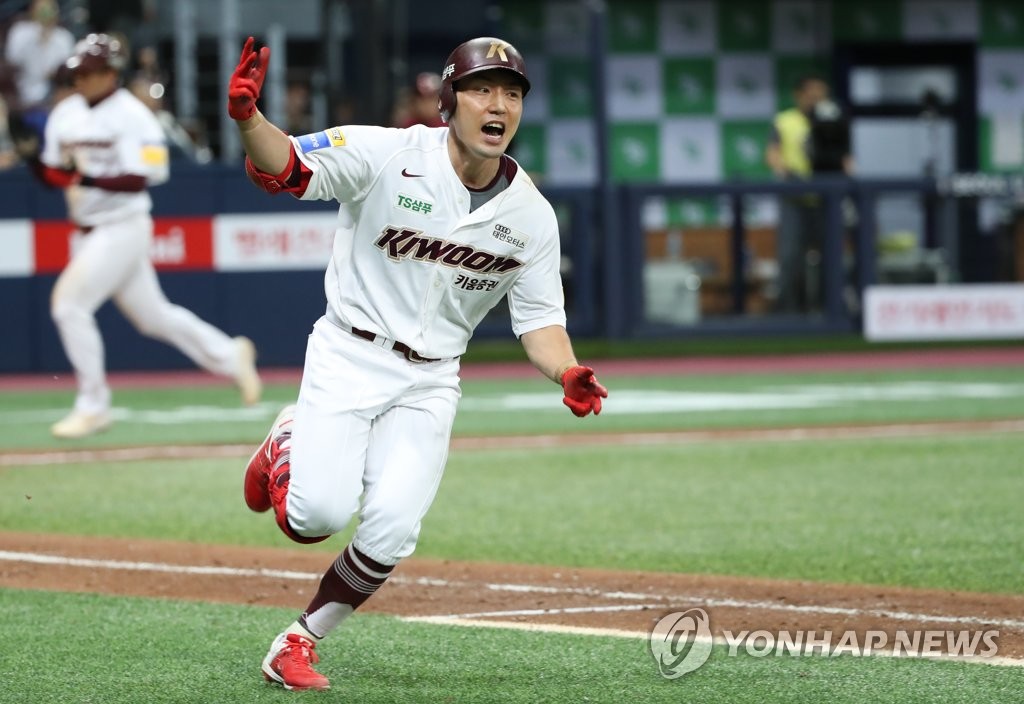 Cha intentionally walked the next batter, right-handed slugger Kim Ha-seong, and chose to face left-handed Kim Woong-bin. The gamble paid off, as Kim Woong-bin flied out to right to end the rally.

The Twins got a run back in the top seventh, with Yoo Kang-nam's solo blast off new Kiwoom pitcher Han Hyun-hee.

The Heroes failed to capitalize on Lee Ji-young's leadoff double in the bottom seventh. But the Twins missed their own opportunity in the top eighth, when they stranded runners at second and third.

The wasted chance came back to bite the Twins. Right-hander Kim Dae-hyun relieved Cha to begin the eighth and proceeded to walk Lee Jung-hoo to start the frame.

Two batters later, Park Byung-ho blasted a two-run home run to center field to cut the deficit to 4-3, atoning for his three earlier strikeouts with one swing of the bat.

Rookie reliever Jung Woo-young retired the next two batters to put out the fire, but the Heroes weren't finished.

And trouble brewed when LG closer Go Woo-suk, who served up a walk-off home run to Park Byung-ho in Sunday's loss, came on to preserve the one-run lead.

Pinch hitter Song Sung-mun greeted him with a single and was sacrificed over to second.

A groundout put Song at third, representing the tying run, and Seo Geon-chang drove him home with a single for a 4-4 tie.

The Heroes failed to finish the job in the ninth. But after a quiet top of the 10th by the Twins, the Heroes took advantage of the opponent's sloppy play to seal the victory in the bottom 10th.