SEOUL, Oct. 8 (Yonhap) -- Samsung Electronics Co. said Tuesday its operating earnings plunged 56 percent in the third quarter from a year earlier, mainly hit by continuing falls in global chip prices, but its performance was better than the market had expected.

The operating profit was estimated at 7.7 trillion won (US$6.4 billion) in the July-September period, according to its earnings guidance.

It marks the fourth consecutive quarter that the world's largest semiconductor and smartphone maker has reported an on-year drop in operating profit.

In the first nine months of the year, Samsung posted an operating income of 20.53 trillion won, down 57.3 percent from a year earlier. Its sales tumbled 7.3 percent on-year to 170.51 trillion won over the cited period.

Samsung has been grappling with the semiconductor industry's downturn amid slowing demand for smartphones and other electronic gadgets since late last year. 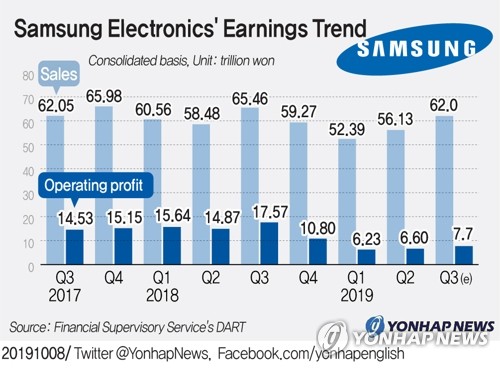 Market watchers said a supply glut of DRAM and NAND flash chips, which account for more than two-thirds of the firm's sales, dragged down its profitability.

An ongoing trade war between the United States and China and export curbs by Japan on key industrial materials crucial for the production of chips and displays have also made it harder for the market to gauge demand, the watchers said.

They voiced optimism, however, for an improvement down the road, expecting prices of NAND, mostly used in mobile devices, to pick up later this year, given a stabilizing inventory level and rising demand.

"It looks like Samsung Electronics has bottomed out," said an industry watcher who asked not to be named, adding that its earnings would recover next year after a seasonal slowdown during the fourth quarter.

The mobile division was also expected to have logged improved results during the third quarter on the back of strong sales of its Galaxy Note 10 and its cheaper Galaxy A series, the analysts said.

The company earlier announced that it has sold over 1 million Galaxy Note 10s in South Korea, making it the fastest Samsung smartphone to reach the milestone. The Note 10 was released only in 5G model in the domestic market on Aug. 23.

The analysts said Samsung's smartphone sales recovered thanks to its revamped mid-range Galaxy A series, which enjoyed popularity in Southeast Asia and Europe.

The mobile division is expected to have logged an operating income of over 2.5 trillion won in the third quarter of the year.

Samsung's display business unit is believed to have racked up an operating income of 1 trillion won on the back of increased shipments of smartphones and high-end displays.

Its home appliance business unit's operating income for the third quarter is put at some 700 billion won, according to the sources.

Samsung did not break down the performances of its respective business divisions, saying it will announce the detailed earnings later this month.

Shares of Samsung Electronics closed at 48,900 won on the Seoul bourse, up 2.41 percent from the previous session's close. The earnings guidance was announced before the market opened. 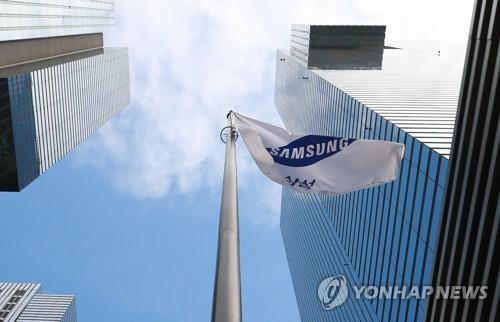