SEOUL, Oct. 8 (Yonhap) -- KEB Hana Bank, a major South Korean commercial bank, has withdrawn from a consortium led by brokerage Kiwoom Securities that is expected to submit a bid for a license to set up an internet-only bank, an industry source said Tuesday.

The consortium led by Kiwoom Securities was one of two bidders that failed to win a license for an online-only bank in May. The Financial Services Commission (FSC) plans to again receive applications for an internet-only bank Thursday.

According to the source, KEB Hana Bank made the decision after it decided to focus on its fintech joint venture Finnq.

An official at Kiwoom Securities said the brokerage has made no decision on whether to submit a bid for an online-only bank this week.

Another consortium led by fintech firm Viva Republica is expected to submit a bid for an internet-only bank.

In May, the FSC rejected applications by the two consortia, citing a lack of fundraising preparations and technical progress in their business plans.

Two internet-only banks -- K-Bank and Kakao Bank -- were launched in 2017, challenging traditional banks in South Korea and forcing them to cut commission fees, and revamp their online and mobile banking services.

Last September, the National Assembly passed a bill that allows a non-financial firm to boost its stake in an internet-only bank beyond the 4 percent ownership ceiling.

The ceiling was intended to prevent big business conglomerates from exploiting a bank as a private vault. However, critics said it discouraged technology firms from making inroads into the financial sector. 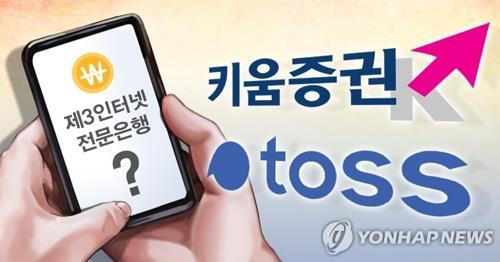