SEOUL/NAGOYA, Oct. 8 (Yonhap) -- A South Korean statue symbolizing Japan's sexual enslavement of women from Korea and elsewhere in Asia was put back on display Tuesday at a major Japanese art show in Nagoya after its controversial withdrawal from the show.

The statue, representing Korean women who were forced into sexual service for the imperial Japanese military during World War II, and its umbrella exhibition -- "After 'Freedom of Expression?'" -- were withdrawn from the Aichi Triennale 2019 in Nagoya just days after the Japanese art show opened on Aug. 1.

The unilateral withdrawal, which the host of the triennale attributed to security reasons, triggered angry accusations of artistic censorship in South Korea and beyond.

As the controversy continued, the host of the triennale agreed late last month to bring back the exhibition, including the statue, and Aichi Gov. Hideaki Omura announced Monday that the exhibit would resume the following day and run till the triennale closes on Oct. 14. 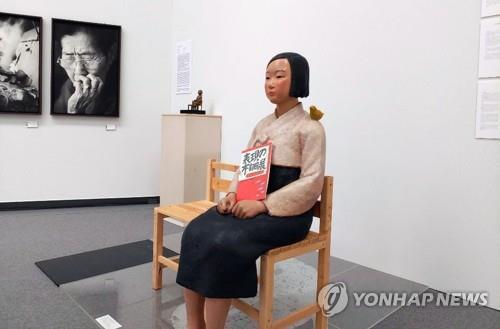 As the exhibition was revived Tuesday, hundreds of Japanese visitors lined up to get into the show. However, only a small group of visitors were allowed in through a tightly organized admission process, triggering accusations of "suppression of free expression."

Nearly 1,400 people applied for a ticket to one of the two sessions, making the admission highly competitive. 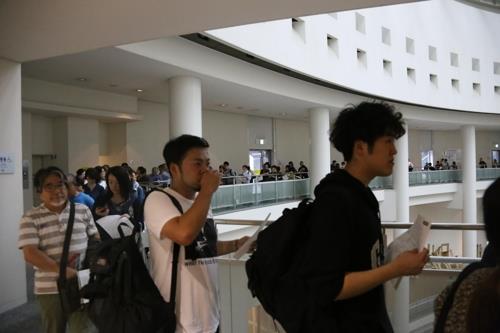 The selected ticket holders were also required to be accompanied by designated tour guides or go through a metal detector check as tight security measures were applied for the show's admission.

Japanese right-wing activists strongly protested the resumption of the exhibition, threatening to resume the protest rally they had staged before the exhibition's initial withdrawal in early August.

The collection that was brought back also includes a provocative video work depicting a portrait of World War II-era Japanese Emperor Showa on fire.

The resumption was reportedly allowed on a set of conditions, including a metal detector check on the exhibition's visitors and controls on social media circulation of the show's content. 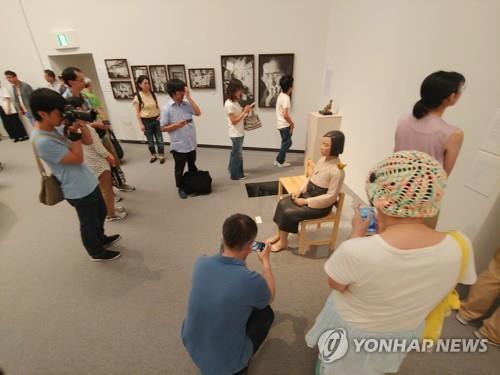