He had a tasty cup of joe at a cafe overlooking the East Sea, together with his wife and some other forum attendees.

"This coffee street is impressive, not like other beach areas with rows of bars or seafood restaurants," he said, sitting on the scenic beach of Anmok in Gangneung, Gangwon Province. "We took a stroll down here and had wonderful coffee at the cafe just over there."

Vasdev, a radiochemist, and his wife, Smita Jabob, a distinguished fashion photographer, also bought a small bag of roasted coffee beans for 8,000 won (US$6.6) as a souvenir. 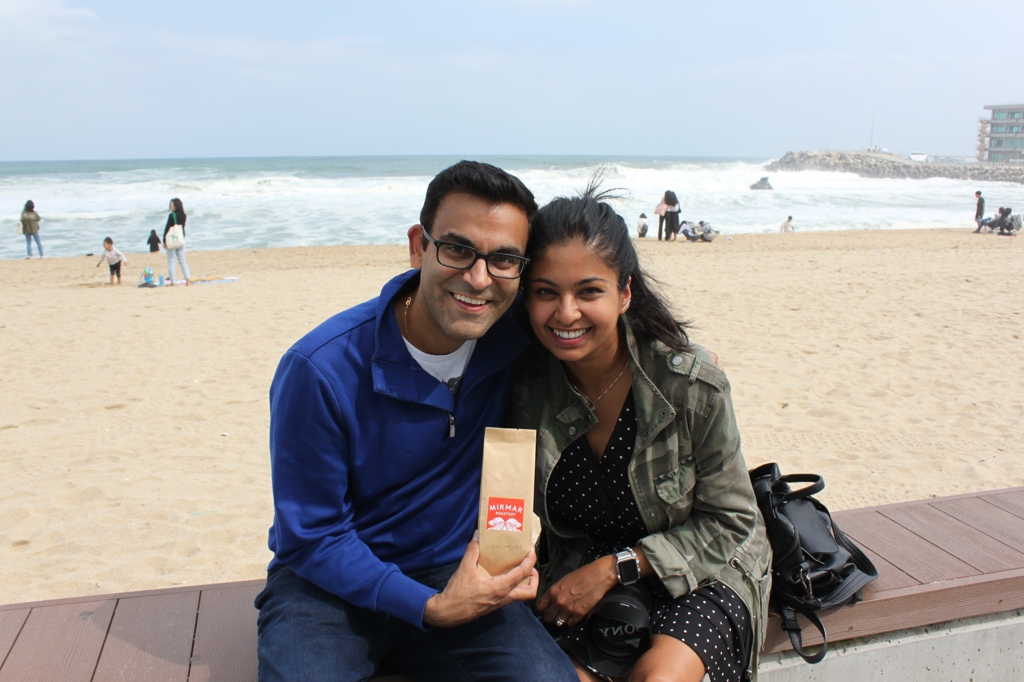 More than 30 coffee shops are lined up along the Anmok Beach in the east coast city of Gangneung, 170 kilometers east of Seoul, which played host to skating and other ice events of the 2018 PyeongChang Winter Olympics.

From rooftop terraces to a five-story all-cafe building, most of the coffee houses, which boast ocean panoramas, serve high-end pour-overs freshly brewed by skilled baristas.

Such large coffee franchises as Starbucks and Caffe Pascucci also have their own berths on the Coffee Street, dubbed a "holy land" for baristas and coffee lovers.

But they are apparently the underdog in the half-kilometer stretch of road selected as a "Star of Korea Tour" and one of the "Top 10 Must-Visit Tourist Spots" by the Ministry of Culture, Sports and Tourism and the Korea Tourism Organization. 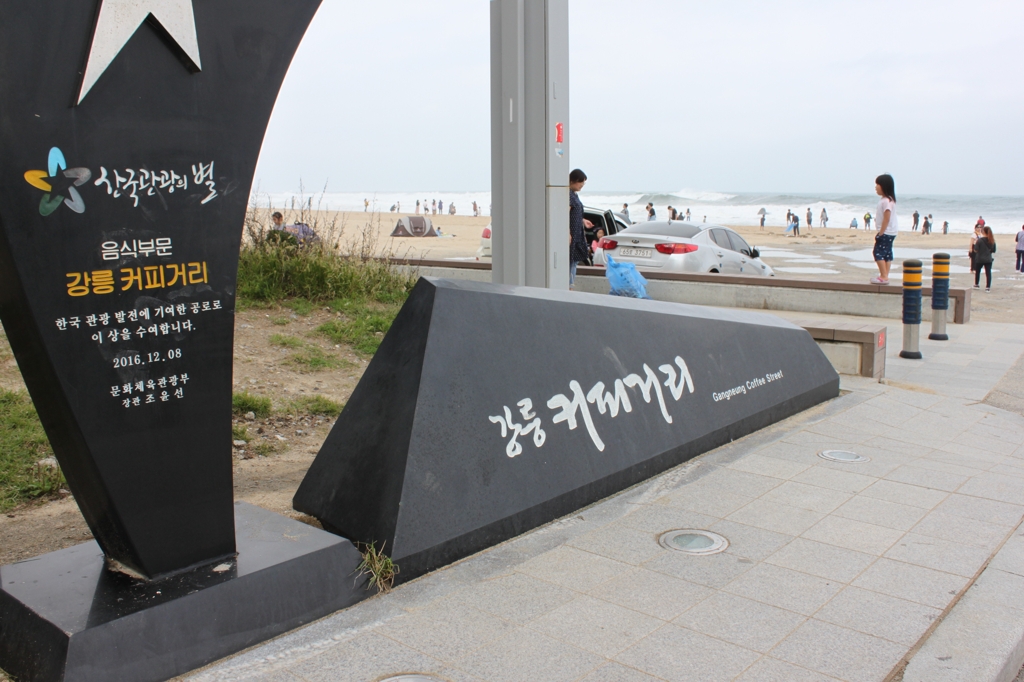 Initially, the district was home to a strip of instant coffee vending machines in the 1980s. Anmok's first two cafes opened in 1998, around when South Koreans began paying attention in earnest to hand-drip coffee instead of ready-to-drink soluble products.

In 2009, Gangneung kicked off an annual coffee festival, the first of its kind in the country, helping it earn the nicknames of "city of coffee" and South Korea's "coffee capital."

"This is a very good platform for us to publicize Tanzania's Arabica coffee," John P.M. Masuka, economic advisor and special assistant to the Tanzanian ambassador to South Korea, said as his embassy participated in the 11th Gangneung Coffee Festival held at Gangneung Ice Arena, about 10 minutes drive away from Anmok Beach. Tanzania's Embassy in Seoul operated a booth throughout the festival, next to those of the embassies of five other coffee-exporting nations -- Colombia, Guatemala, Indonesia, Kenya and Rwanda. 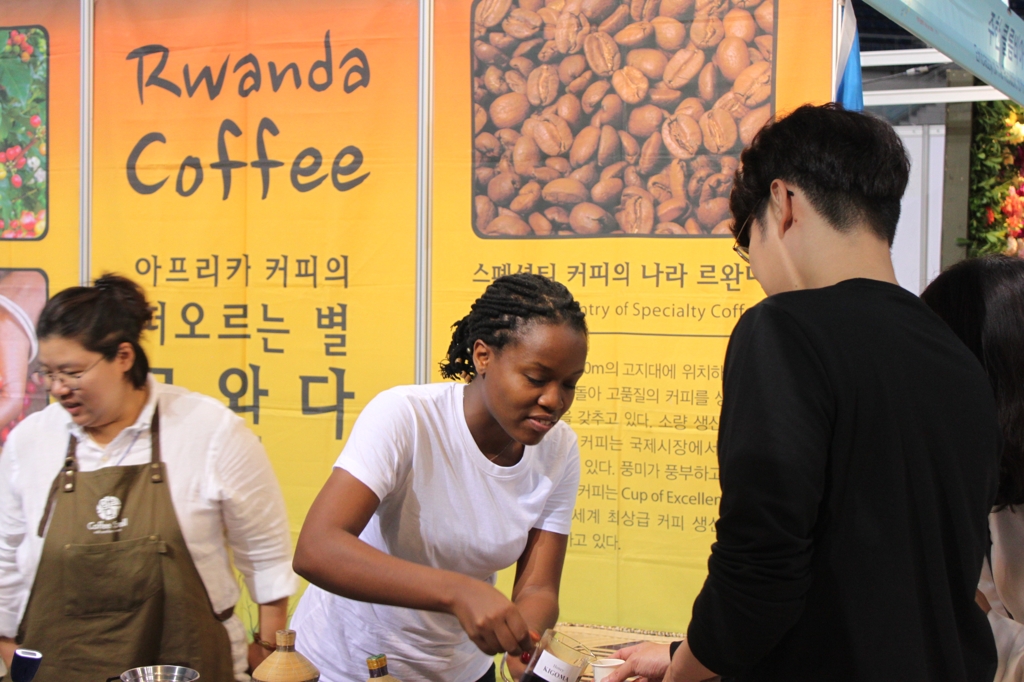 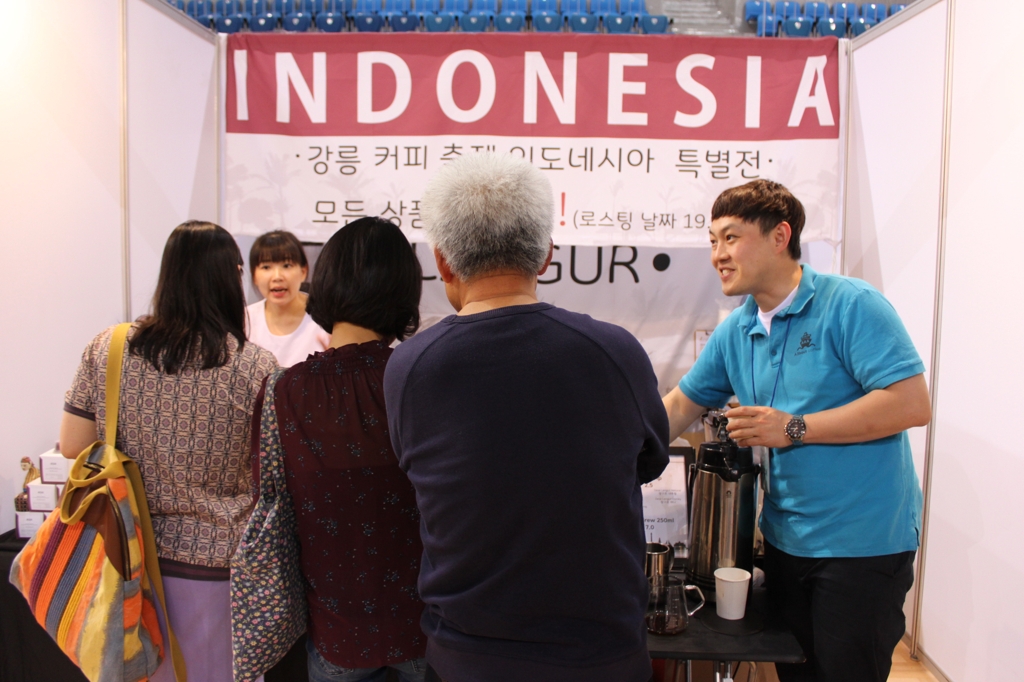 The Gangneung municipal government hosted the four-day event that lasted through Sunday with the theme of "Vice of Coffee." It was joined by more than two dozen coffee firms and shops nationwide, offering a rare chance to get the taste of diverse types of full-flavored coffee for free.

"Tanzania is a latecomer in South Korea's coffee market, as we officially opened our embassy in Seoul in January 2018," Masuka said.

South Koreans are well aware of Mount Kilimanjaro and the Serengeti but not yet of Tanzania's "quality coffee, which has special flavor originating from beans mostly grown in the Kilimanjaro region,'" he added. "Germany is widely known for beer and sausage. It also has delicious, blended coffee," she said. "Germans (have) enjoyed coffee (for) over 300 years. It was a German who invented the first coffee filter." She introduced herself as a former Hanyang University professor who married a South Korean man and has lived in the country for 19 years. Gangneung's stature at the vanguard of South Korea's contemporary coffee culture may have a historical background. It's the only city that has a cultural heritage site of tea culture from the Silla Kingdom (57 B.C.-A.D. 935). 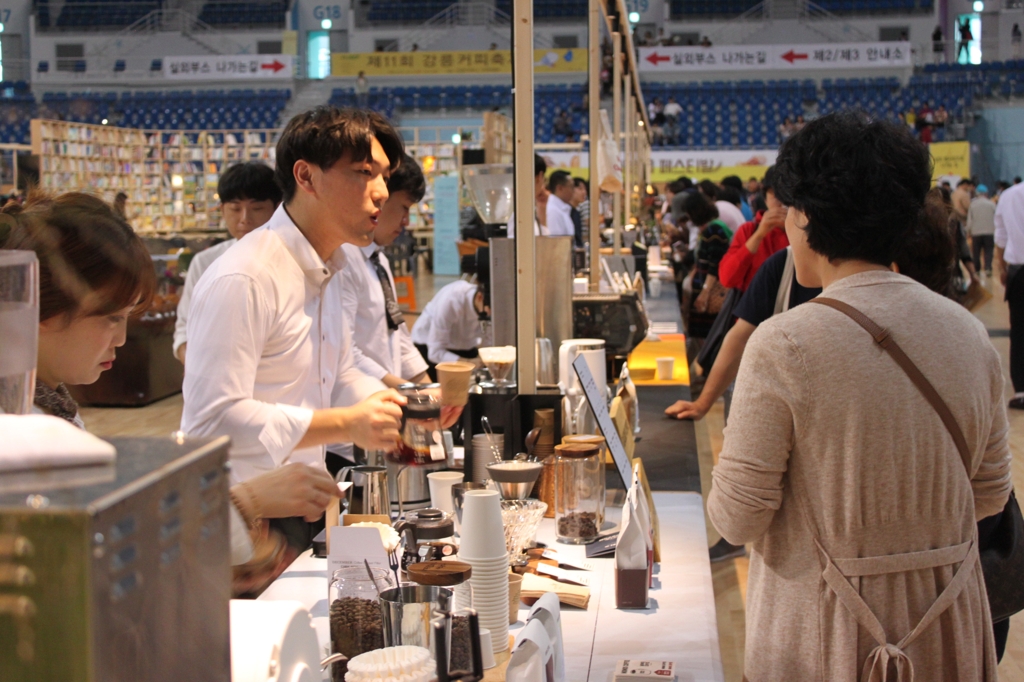 "He has constantly trained good baristas here, an asset of Gangneung's coffee industry," he said. Park owns a popular cafe-cum-factory, Bohemian Roasters, in the city, where a rival local brand, Terra Rosa, is based as well. Coffee Cupper, another specialty coffee maker, has South Korea's first coffee-only museum in the city of 213,500 people. 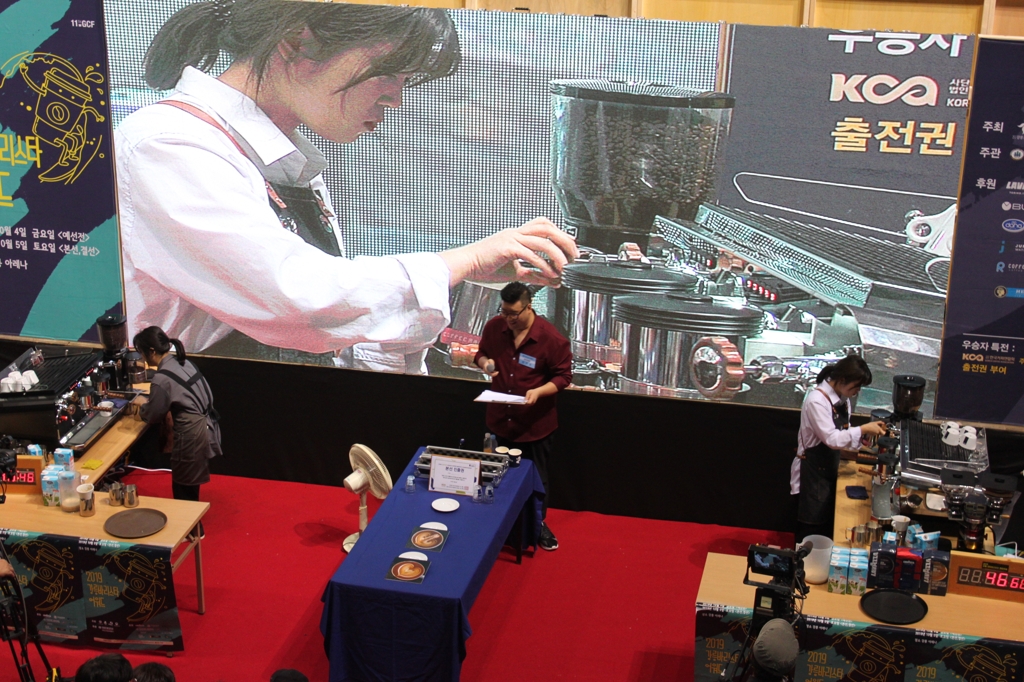 Gangneung city officials agreed that the coffee industry is a driving force behind the local economy and the coffee festival deserves some credit.

Last year's coffee festival attracted 510,000 visitors, while formal data for this year's has yet to be compiled, according to Park Eun-jeong, who handles culture and arts affairs at the City Hall.

"We will continue to develop the festival as part of efforts to vitalize the local economy. We plan to invite more foreign embassies next year in a bid to 'globalize' it," she said.

Since the launch of KTX bullet train services to and from Seoul ahead of the PyeongChang Olympics, Park added, a growing number of people have visited Gangneung for a blend of coffee and sightseeing.

An Australian blogger wrote, "I visited Gangneung for the Winter Olympic Games, but I'll be returning for the outstanding coffee." 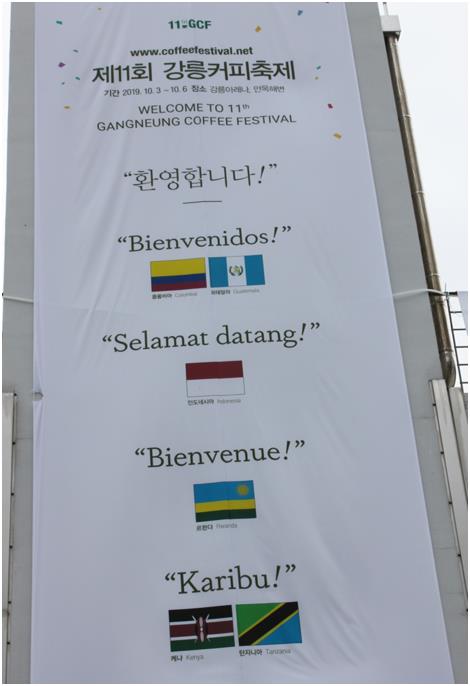