SEOUL, Oct. 8 (Yonhap) -- The military chiefs of South Korea and the United States plan to hold their annual talks in Seoul next month to discuss regional security situations and a wide range of alliance issues, Seoul's Joint Chiefs of Staff (JCS) said Tuesday.

JCS Chairman Gen. Park Han-ki and his U.S. counterpart Gen. Mark Milley are scheduled to hold the 44th Military Committee Meeting (MCM) in Seoul on Nov. 14, the JCS said in a report for a parliamentary audit.

The MCM is held every year before the defense ministers of the two countries hold the Security Consultative Meeting (SCM).

During the meeting, the two sides plan to jointly assess the security situation on the Korean Peninsula and in Northeast Asia and discuss their joint defense posture, according to the JCS.

Also on the table will be the conditions-based transfer of wartime operational control (OPCON) from Washington to Seoul, it noted.

The allies are eying 2022, or thereabouts, as a target date for the OPCON transfer, which calls for a South Korean general to head the Combined Forces Command, with a U.S. general taking on supportive roles.

"During the talks, (Park) will explain to the new U.S. JCS chairman the current security environments on the peninsula and key pending issues and ask for support for Seoul's related policy measures," the JCS said.

The meeting will take place at a time when North Korea has ratcheted up tensions on the Korean Peninsula by carrying out major weapons tests in succession amid little progress in its denuclearization talks with the U.S. The communist country fired short-range projectiles, including ballistic missiles, 10 times so far this year, and launched a new version of its submarine-launched ballistic missile (SLBM) last week. 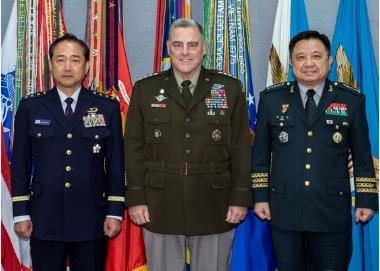