"Should Japanese warplanes violate our airspace over Dokdo, we will take stern countermeasures as far as related law allows and in accordance with our manuals," Park said in an answer to lawmakers' questions during a parliamentary audit.

Japan has repeatedly made its territorial claims to the small islets in the East Sea, where South Korea maintains a small police unit to show its effective control over them.

Renewing its claims in its defense white paper last month, Japan hinted that its fighter jets might be scrambled in the event of a clash over the sky, while citing a July incident where the South Korean Air Force fired hundreds of warning shots at a Russian warplane that intruded into the Dokdo airspace twice. 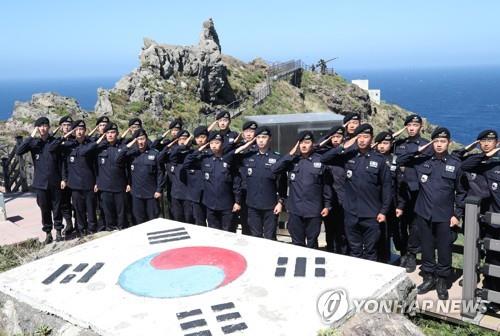 Asked about the military information-sharing pact with Japan, named the General Security of Military Information Agreement (GSOMIA), the chairman said that the JCS will actively exchange its intelligence with Japan until its expiration on Nov. 22.

"While going through this process (of intelligence exchanges), I think the Japanese side will feel more how badly necessary GSOMIA is," Park told lawmakers.

Japan, as well as the U.S., has called for the renewal of the pact, but South Korea has said that the decision may be reconsidered if Japan retracts the export curbs.