SEOUL, Oct. 8 (Yonhap) -- A pro-North Korean newspaper on Tuesday blamed the United Sates for the breakdown of recent working-level nuclear talks, urging President Donald Trump to make a "courageous" decision not to miss the "last chance" for denuclearization of the Korean Peninsula.

North Korea and the U.S. held nuclear talks in Stockholm on Saturday for the first time in about seven months after the no-deal summit between Trump and North Korean leader Kim Jong-un in February.

The North declared that the Stockholm meeting broke down, saying the U.S. came to the negotiating table empty-handed and that additional talks will come only when it drops its hostile policy against Pyongyang. The U.S. claimed that it proposed "creative" ideas and had "good" discussions.

"It is time for President Trump to make a courageous decision not to listen to his staff miscalculating that pressure and coaxing would draw changes from North Korea in disregard of withdrawal of hostile policy," the Choson Sinbo newspaper based in Japan said in an article.

"In effect, 2019 is the last chance for denuclearization of the Korean Peninsula," the paper added. "If the chance is missed, the clock of confrontation between the North and the U.S., which we barely stopped, could move again."

It apparently referred to a deadline that North Korean leader Kim imposed in April, saying that he will wait for a courageous decision from the U.S. till the end of this year.

The paper also said that the "creative" ideas that the U.S. claims to have put on the table were nothing but a variation of its previous proposal of promising compensation only after denuclearization, adding that such a proposal would not move Pyongyang at all. 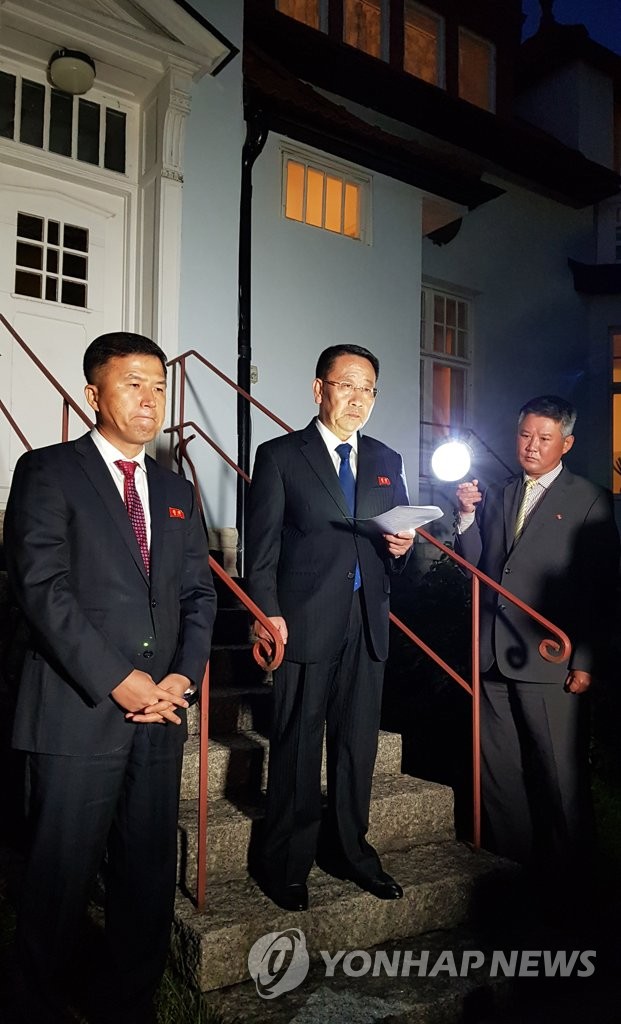 Last week's talks marked a resumption of nuclear negotiations that had been stalled since the February summit between Trump and Kim.

The summit fell apart as they failed to meet halfway over how to match Pyongyang's denuclearization and Washington's compensation such as sanctions relief.

The North has since demanded the U.S. come up with a proposal acceptable to Pyongyang. Washington has remained firm that major concessions should wait until Pyongyang takes concrete denuclearization steps.

On Monday, Kim Myong-gil, North Korea's top nuclear envoy, told reporters in Beijing on his way back to Pyongyang from the Stockholm meeting that the continuation of negotiations will depend solely upon the U.S. and warned that a "terrible" incident could happen if talks don't go well.

Meanwhile, in a separate article, Choson Sinbo denounced South Korea for trying to play a "mediating role" in denuclearization talks between North Korea and the U.S., claiming that Seoul cannot do anything independently of Washington.

"It is dumbfounding, as what role on earth the South is trying to play at a time when it can't do anything but just pay attention to what the U.S. says," the paper said, referring to a trip to Washington by South Korea's top nuclear envoy, Lee Do-hoon, to discuss issues related to North Korea.

The paper added that it would be an illusion to think that a reconciliatory mood between the two Koreas will be formed automatically once progress in denuclearization talks is made.