SEOUL, Oct. 8 (Yonhap) -- South Korea's Cabinet approved a pair of motions Tuesday to extend the missions of military units operating in waters off Somalia and the United Arab Emirates (UAE).

In the session, chaired by President Moon Jae-in, Cabinet members agreed to lengthen the troop dispatch by another year through Dec. 31, 2020, according to Cheong Wa Dae.

South Korea sent the 300-strong Cheonghae Unit to the Gulf of Aden in 2009 to help fight against piracy. Separately, around 140 special forces have been stationed in the UAE since January 2011 to assist in training local soldiers. 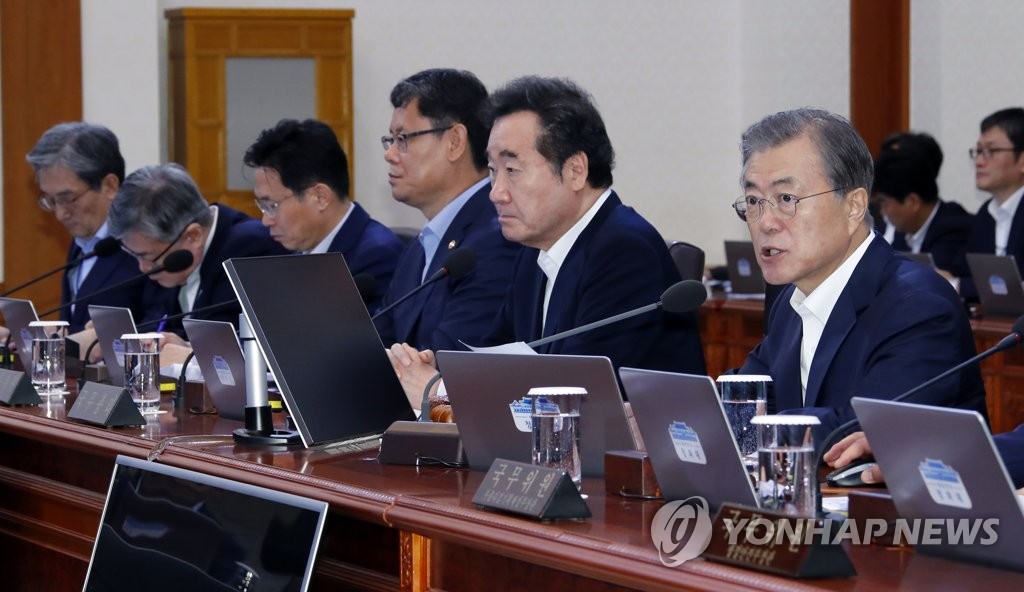 The Presidential Committee on the Fourth Industrial Revolution also reported to the president a set of policy advice on how to cope with rapidly changing conditions with the advent of a new era from the "unprecedentedly fast development of artificial intelligence over the short term and science-technology over the mid to long haul," Han added.

Speaking in front of pool reporters at the outset of the Cabinet session held at the presidential compound, Moon called for government officials to step up efforts to get pending bills, especially on the economy, passed at the National Assembly.

He cited the need to draw up measures to minimize the negative impact of shorter working hours on small- and medium-sized firms.

South Korea has already introduced a 52-hour workweek system for companies with 300 employees or more under the "work-life balance" campaign. Firms with 50 workers or more are required to introduce in January next year.

Moon said it's necessary to give those firms more time to make related preparations.

"It's urgent to get supplementary bills, including flexible working hours, passed at the National Assembly," the president said, urging related government officials to have more "communication" with lawmakers over the matter.

On Japan's export curbs against South Korea that began in early July, Moon stressed that lawmakers need to handle a special bill, aimed at enhancing the competitive edge of local industries connected with materials, parts and equipment, at an early date.